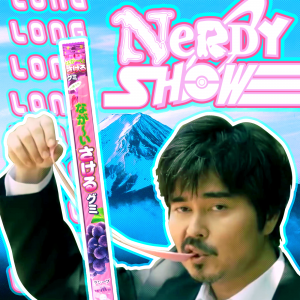 After vacations, business trips, interviews, conventions, and other mayhem – Nerdy Show‘s hosts are back in the studio catching up with each other and what’s been going down in the nerd world.

And… also… catch up with what the Japanese already know a lot about: dramatic and surreal on-going commercial narratives. Did you know that for over a decade an alien has been impersonating Tommy Lee Jones, drinking canned coffee, and doing everyman jobs in Nippon? Did you know that NO ONE can resist a looong, looong maaaan? Did you know that Buffy the Vampire Slayer‘s Giles may have started this entire phenomenon? That’s not even half of it! We talk God of War, Lost in Space, Ready Player One, Pacific Rim 2, and give our two credits on everything worth doing in the past month of nerd stuff.