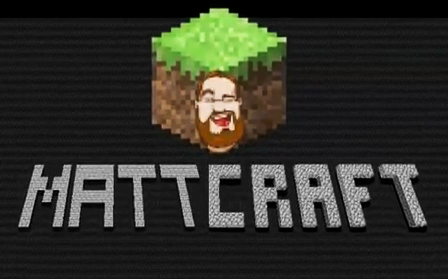 Minecraft mania is sweeping the globe!  We were totally into it before Penny-Arcade posted about it. Curse you season break – we coulda been on top o’ that! But hey, it’s not about who shot first (unless we’re talking Star Wars and I think we can all agree on that answer) it’s about us all having crazy fun digging into the earth and running away from things in terror.  Nerdy Show will be nerding-out about Minecraft and sharing all our many adventures and escapades very very soon, when Season 4 awakes from its slumber.  But why wait to dive into Minecrafting?

Huh?! You don’t know what Minecraft is?  Clearly you haven’t been Internetting enough, but that’s okay, keep reading…

Experience the world of Minecraft and learn of its adventure and peril with your guide, Matt Rex Downham – intrepid explorer, master of colorful phraseology, fighter of sheep.  You may remember Matt from previous video postings, such as “Dahrma Fantasy Football“.  Yes, Matt was a member of long-lost nerd comedy group, JediBFF, best known for the romantic comedy, “Good Morning iPhone”.  Matt was also the starring role in the video game peripheral psychological thrillers “Rock Band: One Man’s Journey” and its sequel, “Wii Fit: One Man’s Journey”.   With Minecraft, every world is unique and you never know what’s going to happen, so think of Mattcraft as some sort of comedy reality show, a one-man improv sitcom… with skeletons.

In this first episode, Matt briefly shows what Minecraft is, how it works and then adventure on the high seas, far, far from home and it’ll be night soon… EMBARK!