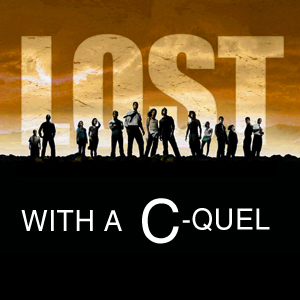 It’s all over.  Lost has finally ended after six seasons and Nerdy Show cannot let that landmark event go unnoticed.  But all is not as it seems on Nerdy Show.  Two of our friends are missing and have been replaced by… others.  These impostors may appear to be Hex and Brain, but we assure you they are not.  Don’t be fooled.

Last year we followed up the season finale of Lost with a special appearance by Marc with a C in the season 1 episode known as “Lost with a C”.  (Never fear, Galdap is close to conjuring forth a sampling of that lost episode.)  It appears that the finale of the series has warranted his return, though why he’s chosen to wear Hex’s clothing is another matter entirely.  After some careful deduction we’ve determined that the other impostor wearing the skins of our beloved Brian, is artist and co-creator of the Image comic, Chew, Rob Guillory!  The fiend!

Despite all these impostors threatening the well being of Nerdy Show, it turns out that we all have something in common – we all love Lost. The series is over, so I’ll only say this once SPOILERS ABOUND!  We get into our most nagging unanswered questions, our thoughts on the finale, the impending doom of a massive solar flare, illegal poultry, and Marc plays us a few tunes!  There’s something for everybody.

And if you’re in Orlando, be sure to check out Marc perform at The Social on June 13th, opening for Steve Poltz!  Details here.