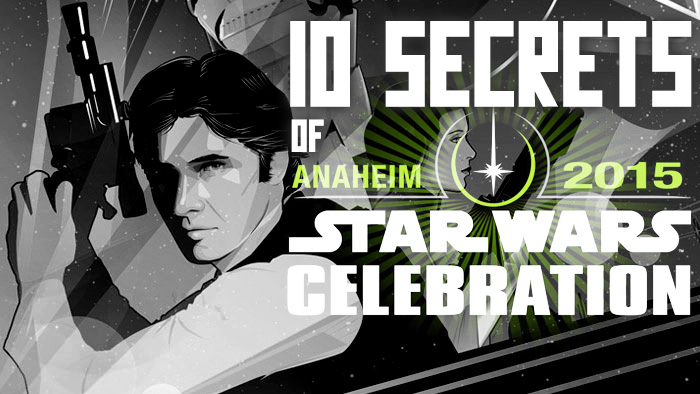 This year’s Star Wars Celebration was seeded with a great many secrets. And as always, the crew of State of the Empire, our Star Wars speculation podcast, was there to give nuanced insight into the galaxy far far away. No doubt you caught the big announcements like the new Episode VII teaser or the details of Rogue One‘s plot. Perhaps you even saw our discovery that Ponda Baba and the other strange creatures of the universe have retained their expanded universe names, solving the Ponda Baba Conundrum.

There was no shortage of fascinating surprises hidden throughout the event – you can hear us talk at length about the event on the latest episode of State of the Empire, but here we’ve singled out just a few of our favorite lesser-known reveals from the show. 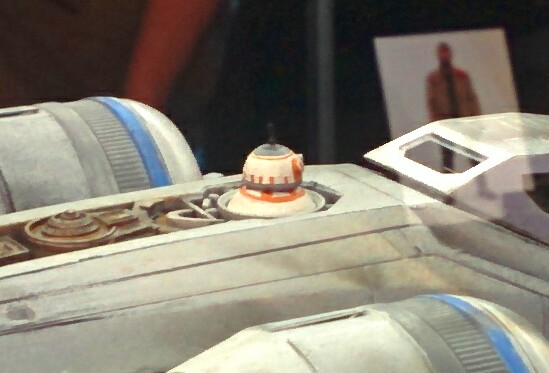 BB8 is an Astromech Droid

…Or at least he can function as one. This is a photo of a model used in The Force Awakens appearing in the prop exhibit at Star Wars Celebration – the new Incom T-70 X-wing fighter flown by the Resistance, likely the one flown by Oscar Isaac’s character Poe Dameron. R2-D2 is an astromech droid made for servicing spacecraft while they’re flying as well as providing high level navigation functions. Since we see the super cool “ball droid” BB8 hooked into a starfighter, seems as though the adorable droid must certainly be an astromech too.

Another fun fact relating to BB8 – in the press conference Kathleen Kennedy mentioned a company they partnered with to bring the droid’s astounding gyroscopic ball movement to life. 10-1 she’s talking about Sphero. And if so, you can get your own mini BB8 right now. UPDATE: Our suspicions have been confirmed. 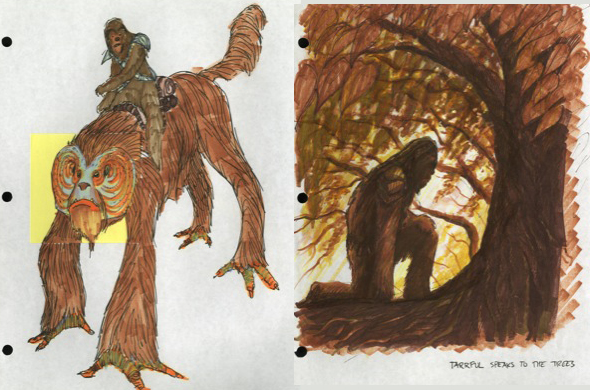 Wookiees Ride Monkeys and Are Force-Sensitive to Trees

An unmade story arc of The Clone Wars was set on the Wookiee’s forest planet of Kashyyyk, and in it the Wookiees ride on these large monkey creatures. According to showrunner Dave Filoni, the Wookiees don’t like riding them as they’re sacred forest animals and treated with reverence, but in times of need they make exceptions. As seen in the adjacent sketch, “Tarfful Speaks to the Trees”, the Wookiees have a great reverence for the forests – made manifest in their Force-like ability to commune with the trees themselves. In this illustration, Tarfful is asking the trees’ permission to do a drastic thing to repel their enemies: burn some of the forest down. 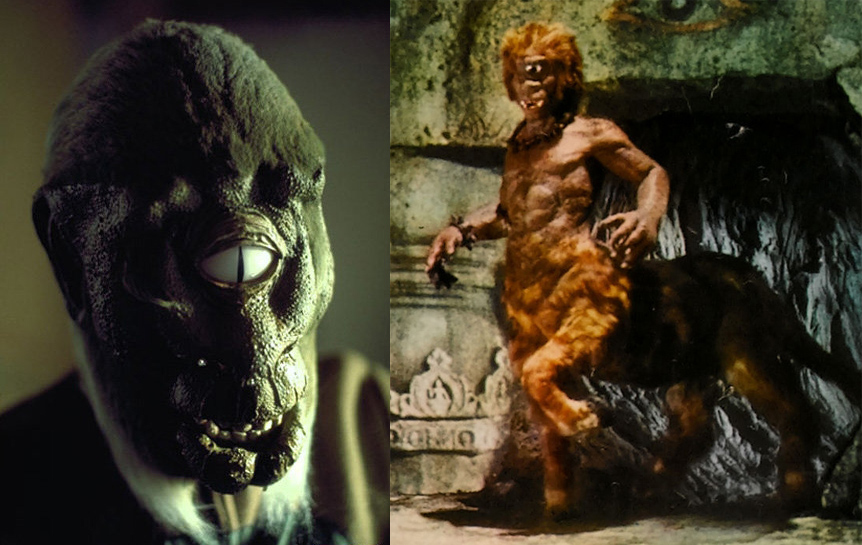 In a roundabout way, that is. The 1973 film featured, among its many Ray Harryhausen animated creatures, a cycloptic centaur. The burgeoning creature guru Rick Baker was to make masks for retail based on the film, but it never panned out. The pickup shots for the Mos Eisley cantina featuring some of the most memorable creatures were assembled quickly and as such many of the creatures were constructed from parts laying around. And so, the centaur mask had most of its fur stripped off, was repainted, and became the cantina patron eventually known as Myo. He’s joined by many other Rick Baker misfits including a repainted Frankenstein’s Monster mask and a reconfiguring of the mutant baby from the 1974 film It’s Alive. 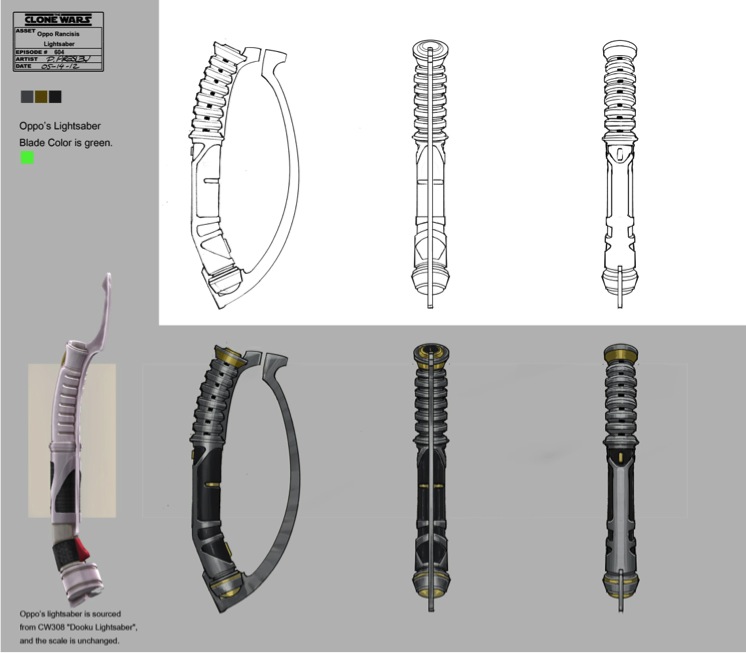 Few members of the Jedi Council didn’t have their unique lightsabers elaborated on in one point of cannon or another, but we never saw Oppo Rancisis‘ until now. This concept was developed for an episode of The Clone Wars that was never made. In the Untold Clone Wars panel this was one of the many fascinating secrets showcased by showrunner Dave Filoni. 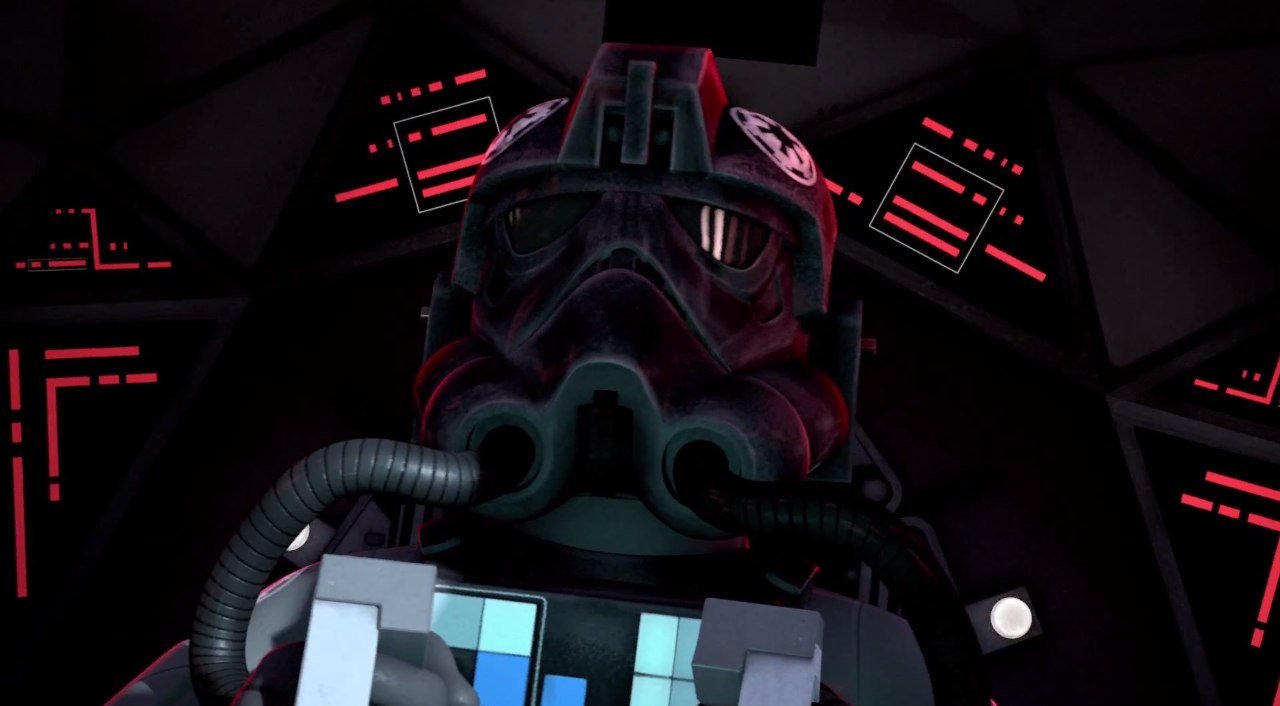 Dave Filoni Wants to Make a Show About Imperial Pilots

Apparently it’s an idea he’s been kicking around for a while now and it’s not likely to happen soon – but some day it could. As reveled during the panel, “Rebels: Past, Present, and Future”, Filoni’s keen to spend some time with a crew of airmen, likely Imperials, in a show styled after The Right Stuff and Top Gun. 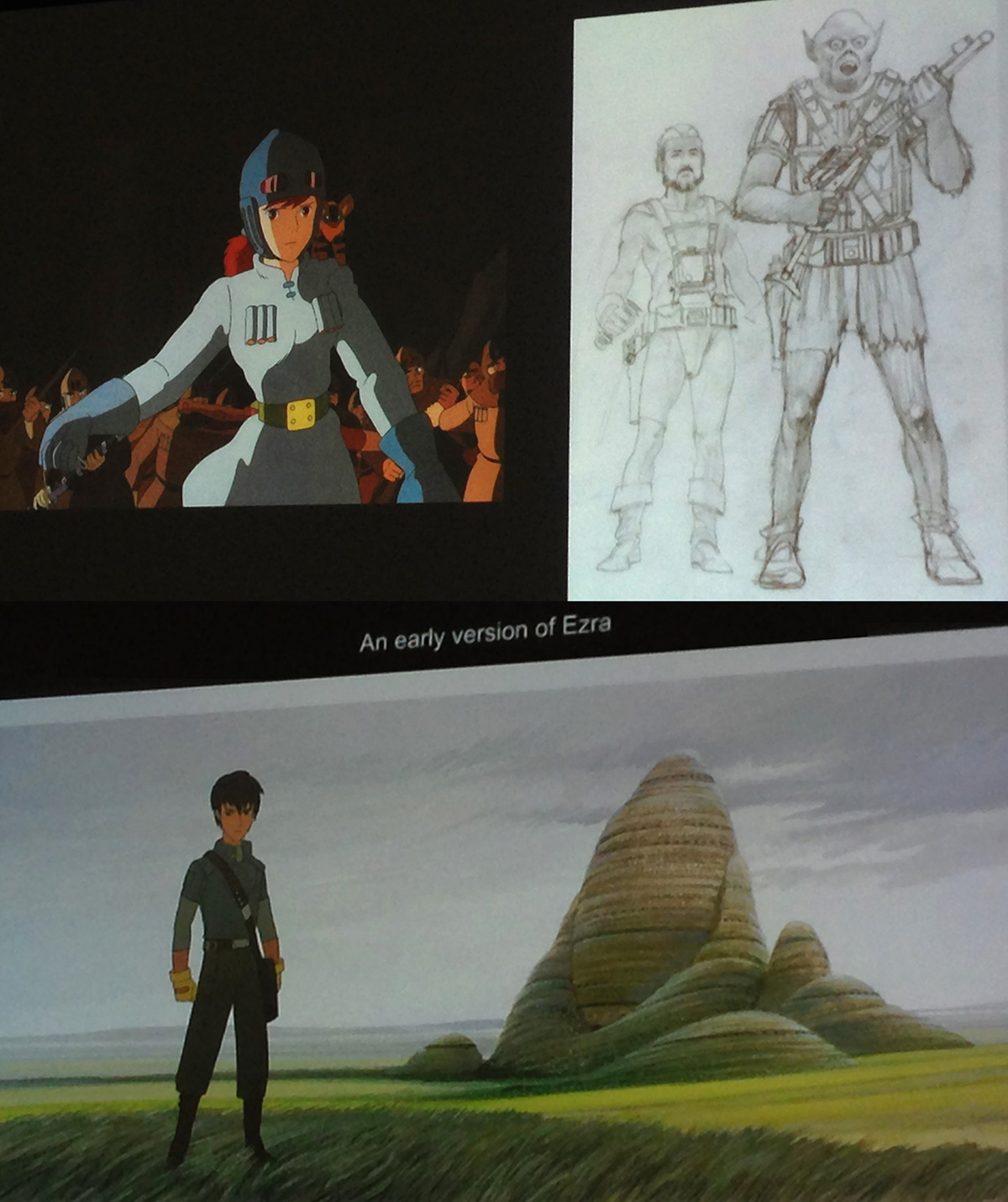 The Look of Star Wars Rebels is a Mash-Up of Ralph McQuarrie, Hayao Miyazaki, and Kenner Toys

After the abrupt cancellation of Clone Wars, the Lucasfilm animation team had only 2 months to come up with the look and lead character designs for Rebels. In order to better reflect the classic trilogy time period and aesthetic, they looked to Ralph McQuarrie’s original Star Wars concept art. However, when it came to streamlined yet expressive character designs, they drew their inspiration from Hayao Miyazaki’s legendary animation. And when it came to character body proportions they took inspiration from the original Star Wars figures from Kenner.

In many cases, when testing character designs, the Rebels team would insert their characters into McQuarrie’s paintings. If they felt like they belonged there, then they had a winner. 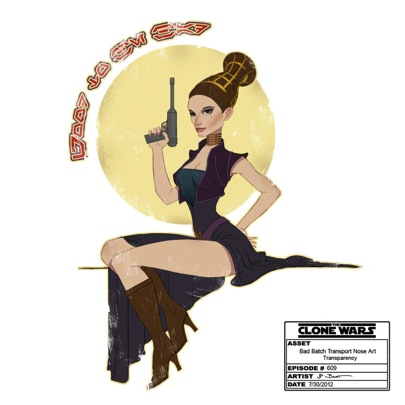 The Bad Batch are an elite group of clone troopers with specialized mutations. In an unfinished episode arc of The Clone Wars Anakin notices a sexy portrait of Padme on the squad’s ship akin to the nosecone illustrations on World War 2 planes. Suffice it to say, he’s none too pleased. 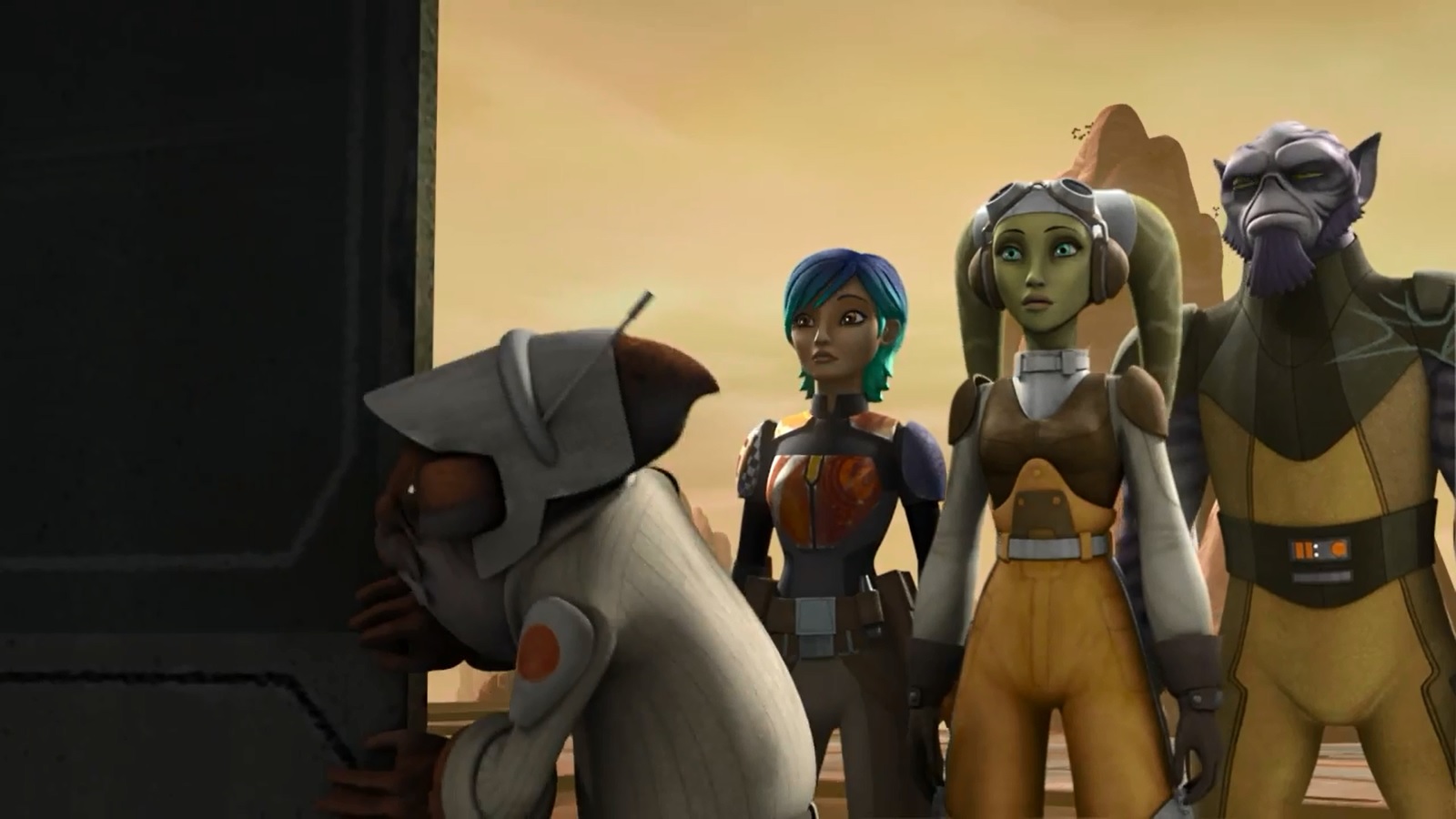 The short, moustachioed Mon Calamari (the race Admiral Ackbar famously belongs to) is featured briefly in the trailer to Rebels season 2 (seen bottom left). He’s named is Quarrie, a tribute to Ralph McQuarrie, and is the curmudgeonly manager of an airstrip in one of the season’s early episodes. 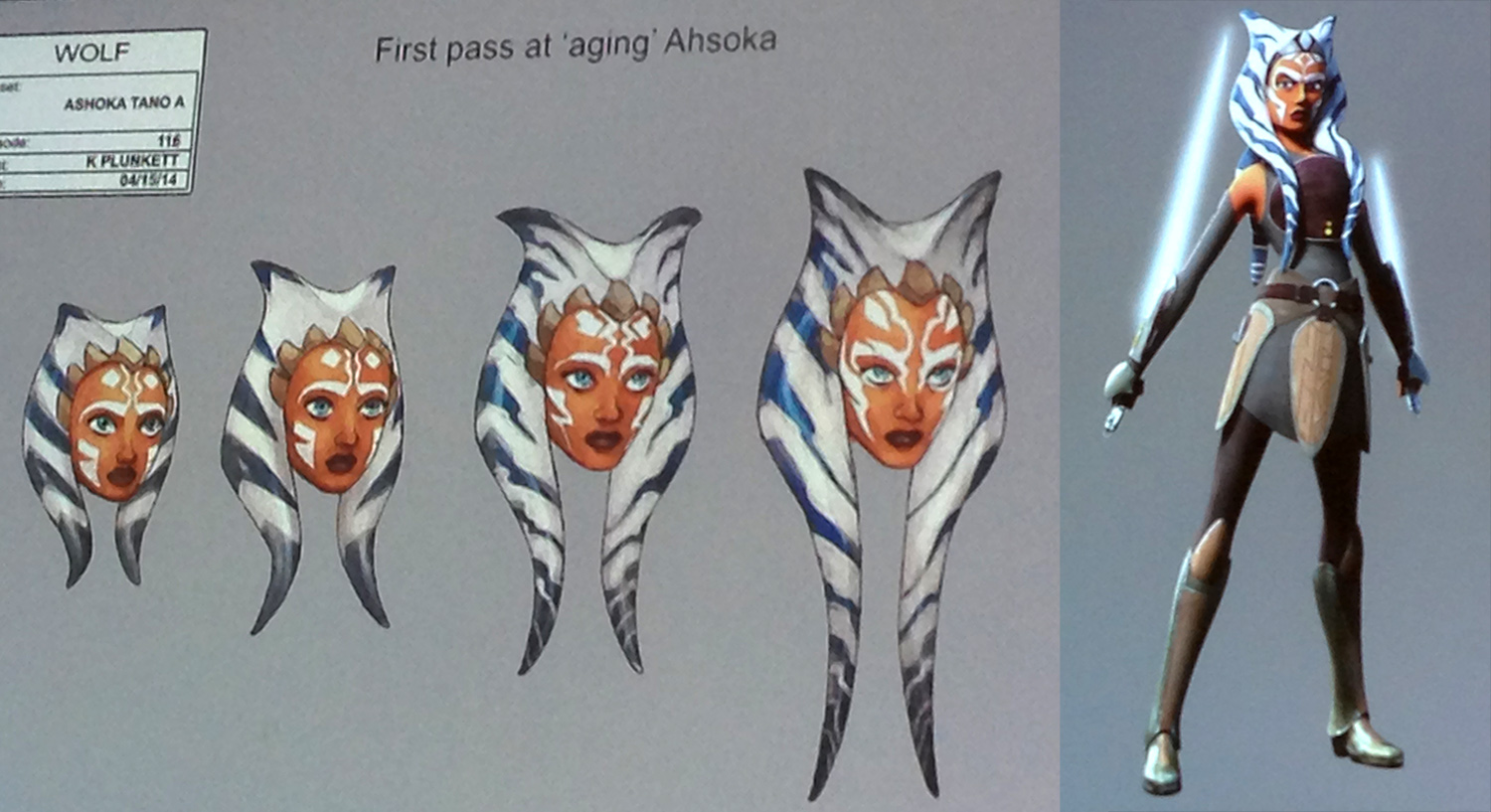 Ahsoka Tano, the apprentice of Anakin is all grown up in Rebels and she’s got a new look. The team aged her, doing many tests to find a right fit for how her facial markings would change over time, and in the Rebels: Past, Present, and Future panel, Dave Filoni revealed that her new look is styled after female samurai. Her armor is suggested to have originated as discoveries in ancient temples on her quests after being kicked out of the Jedi Order. What’s more, her dual lightsabers are older models, with more rectangular blades that curve slightly, katana-like. The color is faint blue – almost white – indicating that the crystals within have not yet fully attuned to her or that she herself is not fully attuned. 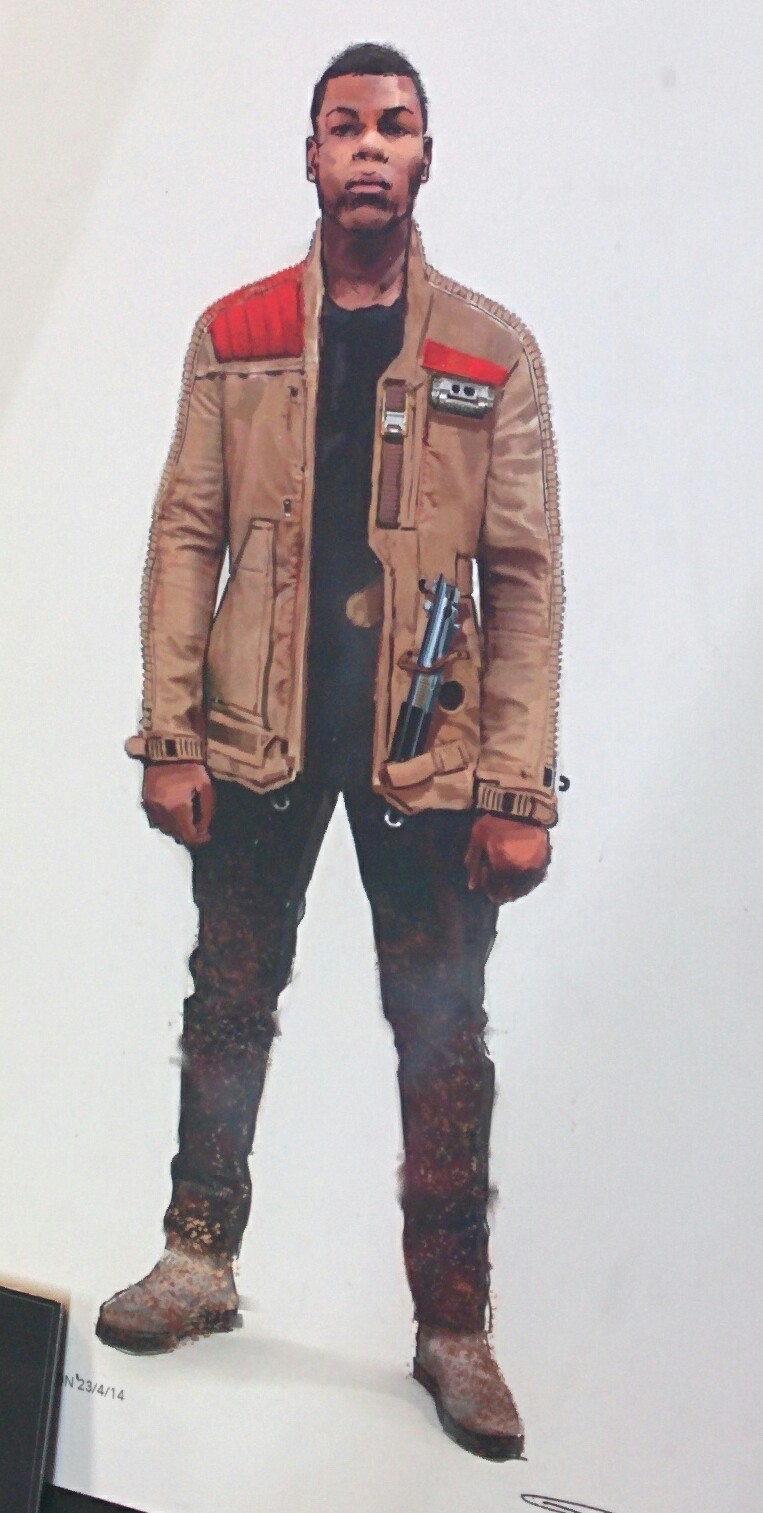 Whether or not John Boyega’s character is the force-wielder that Luke will inevitably train, we can’t say definitively. However, this concept art displayed alongside Finn’s outfit at The Force Awakens‘ prop exhibit at Star Wars Celebration clearly show’s he’ll be hanging on to Anakin/Luke’s blue-bladed saber for a while.

Posted in: Movies / TV State of the Empire