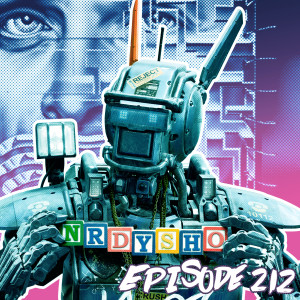 What happens when you mash up both Short Circuit films, Robocop, and South African rap group Die Antwoord? We’re about to find out!

Enter CHAPPiE: an unusual piece of pop culture fusion from District 9 director Neill Blomkamp. It’s about a police robot-turned cute, sentient robo-pal growing up on the mean streets of Johannesburg – at least in short. The film has a lot going on – so join Cap, Brandon, and Denika for our CHAPPiE review and find out if this feature can handle the server load.

But first, it’s only right that we prep the playing field for this newcomer on the sci-fi scene with some discussion on what’s come before it. Cap is joined by Nerdy Show‘s sci-tech correspondents Jon and Jessica as well as Derpy Show‘s boR and Wicked Anime‘s Andrew and Jonathan to discuss the allure of robots in both reality as well as fiction and the greatest examples of artificial intelligence gone wrong.

Thanks to Robert Madden and BigBadShadowMan for the Microsode topics!