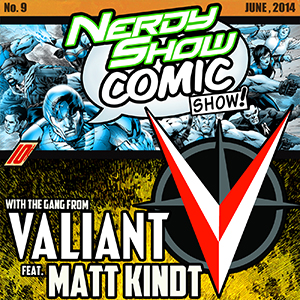 Coming to you directly from I-95… it’s Nerdy Show Comic Show!

The Nerdy Show crew traveled from Orlando to Charlotte North Carolina for our favorite comic convention of the year: HeroesCon.  We hung out with some cool folks, met some fine people, moderated some cool panels, and now we’re driving home in the middle of the night. In this episode not only do Cap, Tony, and Trench discuss the HeroesCon happenings, but we also share one of Nerdy Show’s panels! Aaron was joined by a whole troupe of awesome talent from Valiant comics: writer Matt Kindt (Mind MGMT, Unity, Rai), artists Tom Fowler (Quantum and Woody) and Lewis Larosa (Harbinger), colorist Brian Reber, and associate editor Alejandro Arbona and editor Josh Johns. They talk about the burgeoning young publisher and how their method for taking on a shared superhero universe vastly differs from the Big Two.

If you’ve never heard of Valiant – let this be a crash course in what they’re all about, and if you’re familiar – you’ll dig this peek behind the scenes. Also we’ve got the latest updates on the D&D $upport Drive!