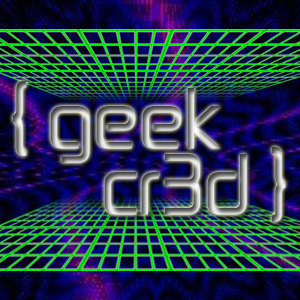 Anyone who knows me is incredibly familiar with my love for Bill Nye.  (Detailed gushing here.) As child, Nye made me feel like being an egghead was not only acceptable but, in fact, cool. As an adult, he continues to inspire me to create my own online video tutorials.

We’ve recently seen him step back into the limelight with an appearance on Dancing with the Stars. While some may criticize his decision and accuse him of ‘selling out’, I see things in a different light.

The world has changed since we Bill Nye fans were kids. With the increasing amount of technology in our lives, kids today expect more instant gratification. They’re not going to be entertained by a half-hour of sciencey goodness on a public access channel. They will, however, watch Dancing with the Stars and other reality television programs. It only makes sense that he’d have to find new ways to inspire kids today using the tools available.

I see Nye’s “Science-In-A-Box” shipments through Quarterly Co. in the same way. While haters may say Nye is just trying to get attention, I see it as a clever means to inspire the next generation of young scientists. In many ways it’s more effective than a television program, as subscribers can immediately get hands-on with science.

After a barrage of travel and work, I was finally able to open my first shipment today. I was delighted by what was inside, as well as by the message from Nye:

“Hopefully this mailing will get you thinking about how to do more with less. We may only be human, but we can certainly change the world.” 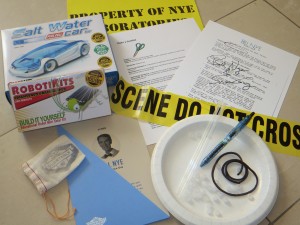 My spoils from the first Bill Nye Quarterly shipment.

Inside I found: a solar robot kit, a salt water fuel cell car kit, a bottle-to plastic (b2p) pen, a compass, color-changing beads, a leather cord,  parts and instructions for making your own sundial, and a copy of the original Bill Nye the Science Guy roadmap. In traditional science guy fashion, there is a video to accompany the box, where I learned that b2p pens are the pen of choice for Bill Nye. Here I got uber excited because THEY’RE MINE TOO AND I ALSO PREFER THE BLUE INK!

Ahem. Anyway. What stuck out most in the kit was the detailed instructions for building a sun dial, complete with a listing of scientific concepts learned. This brought me back to the days of my childhood, when I would recreate experiments and make projects I saw on the program. Plus, the materials are simple: you just need paper plates, straws, and chalk. While I’m also excited by the robot bug and car, I think I may gift them to a younger friend or family member. I build these types of things all the time, and giving the gift of science might help inspire someone else.

I’ll admit, I was disappointed that the kit did not include a bow tie. Not really science-related, true, but I would have worn the hell out of that bow tie. Perhaps I’ll get one next quarter…

Now if you’ll excuse me, I’m off to make a sundial.