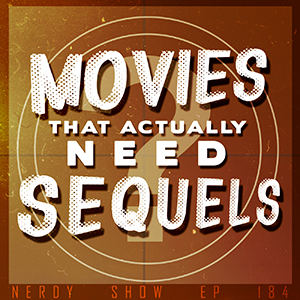 Movie sequels are a tricky business. Crappy movies get sequels all the time and on occasion perfectly good standalone movies are forced into the sequel game with mixed results or even the dreaded… direct to video sequel.

Meanwhile, plenty of perfectly good film franchises are lying in wait as other movies are given the full-service sequel treatment. So what films actually need sequels?  Nerdy Show listener Arkais requested that we discuss just that.  Join a whole party of Nerdy Show personalities from across the Network (Cap, Hex, Doug, Tony, Brandon, La Valle, and Trench of Nerdy Show, Jarrod of Flame On, and boR of Derpy Show) as we feast on treats from Japan (provided by awesome fan Anduin) and give our two cents on what films desperately need a follow-up.

Discuss this episode on the forums.