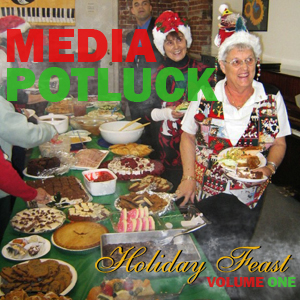 Hey guys, Cap here.  As some of you may know I have a side project called Media Potluck.  It’s actually what propelled me into this wacky world of internet journalism in the first place, and is one of my favorite projects. Media Potluck‘s goal is to discover and share eclectic or forgotten media of all kinds – music, movies, comics, even advertising – everything. If it’s amazing, funny, or both we bring it to light and if we can, investigate the whos, hows, and whys behind it. As of late, Media Potluck’s been in a temporary hibernation while other projects get into gear, but while the Potluck slumbers, its efforts continue with Audio Archaeology, a spin-off article series over at Consequence of Sound.

Two years ago I started a tradition of making an eclectic holiday compilation and I wanted to share it here.  It’s not 100% nerdy, at least not obviously, but scan over the track list and the write-ups and I think you’ll get the idea. I’ll be reposting Media Potluck‘s other holiday treas here over the next few days and weeks. Happy Holidays Nerds!

Christmas music is everywhere this time of year. Since the beginning of November, the air has been littered not with the cheerful dust of snowflakes, but a mess of mediocre audio. Certainly classic recordings have their charms, but the classics are over played and mainstream holiday songs are mostly of flimsy facades of holiday cheer over less than inventive songwriting. As a genre, Christmas music is very limited. It takes a lot of creativity to create a truly stand-out holiday song. Throughout the years, many brave and artful souls have undertaken the challenge, either to render the cliches warm and heartfelt again, or simply to turn the whole concept on its head.

I’m pleased to present you with a new holiday tradition: Media Potluck’s Holiday Feast, a collection of worthy holiday tunes to make the festivities more merry, bright, and palatable – complete with track-by-track commentary! These tracks are the very best of holiday music- from blatantly Christmas-related, to commentary on the hectic gift-giving season, or simple celebrations of wintertime.  Some tracks are more common than others, some are quite eclectic, all of them guaranteed to give you a break from dross of the shopping mall sound system.

A beautiful and mysterious-sounding wintery bit of classical music from the Barry Levinson film, Toys. The film deserves a Media Potluck article all on its own. It’s an incredible holiday film that’s watchable any time of the year. This song appears in the opening scene of the film and leads into the following track, “The Closing of the Year.” Shirley Walker, who serves as conductor on this track, was a frequent collaborator with Danny Elfman and is perhaps most notable as the composer of the entire score for Batman the Animated Series and its spin-offs.

2) The Musical Cast of Toys Featuring Wendy & Lisa – “The Closing of the Year”
Along with John Williams’ “Somewhere in My Memory” from Home Alone, “Closing of the Year” is a Christmas song so smartly composed that it gained an existence past the film that spawned it. Though lesser known than the aforementioned track, “Closing of the Year” has since been recorded by opera–types as a holiday tune and occasionally gets airplay on holiday stations. It was written by mega-producer Trevor Horn and score composer Hans Zimmer who jointly crafted Toys’ wonderful score and soundtrack. Wendy & Lisa are the musical duo once a part of Prince’s Revolution. Since the late 80s they’ve released their own albums and have written a number of television scores, including Heroes. This version of the song comes from the Toys soundtrack album and blends in from the first track. The extended single is longer and features vocals by Seal. Check out the video of that version here:

The Smashing Pumpkins are an unlikely source for a heart-warming Christmas hit, but they delivered one. This track was released in 1997 for the third installment of the A Very Special Christmas compilation series. Whereas major artists such as Paul McCartney and Elton John made new holiday hits of the cheery party variety, the savage, alt. rocking Pumpkins did just the opposite. The low key, harmonic styling of “Christmastime” was a direct product of the era the band was heading towards with their electronica-influenced 1998 album, Adore.

In 2003 prog rockers Jethro Tull released a full-blown Christmas album. Though this may seem odd to the casual eye, Tull released a Christmas song as early as 1969 and other Christmas songs, or winter-themed tunes ever since. The album features new recordings of these tracks as well as new songs. This track is an instrumental composed by Tull guitarist Martin Barre.

In 1977 David Bowie appeared in Bing Crosby’s Merrie Olde Christmas, a television special, and sang a duet with the acging crooner. Often referred to as one of the weirder moments in television history, it’s something that has to be seen and heard to be fully understood. The “Peace on Earth” portion of the duet was written especially for Bowie who in actuality was none too fond of “Little Drummer Boy”. This song is among several Christmas tunes parodied by the cast of Adult Swim’s Venture Bros. and released online.

7) The Darkness – “Christmas Time (Don’t Let the Bells End)“
A comedic rock track from modern Brit glam rock outfit The Darkness. The comedy aspect of the song may fall on deaf ears without a little morsel of information, so allow me to educate: “bell end” is slang for the head of the human penis.

Chris Squire and Alan White are two members of Yes. Following the 1980 breakup of the band, these two continued working together and attempted to form a supergroup with Jimmy Page called XYZ (Ex-Yes and Zeppelin). The project never panned out and in very short time Yes reformed. Between those two events the duo released one track – “Run With the Fox” an unusual, but spirited holiday tune that can’t help but conjure up visions of various animated films about quadrupedal woodland animals.

In 1992 folk rockers the Crash Test Dummies released a Christmas single of their rendition of “The First Noel“. The version was traditional but made distinctive by lead singer Brad Roberts‘ very deep voice. Years later this spawned a whole album of traditional Christmas song re-renderings, including this track. If you ever wondered what “Jingle Bells” would sound like if sung by pagan tribes or demons, well, now you do. The album is amazing, pick it up HERE.

10) mc chris – “Evergreen”
Adult Swim personality and rapper, mc chris, renders a charming portrait of the dead-beat drug-addled youths who work part-time at Christmas tree tents. If you like your holidays full of sex and cuss words, this is the song for you. Pick up “Evergreen” and HERE

Rick Moranis and Dave Thomas‘ legendary comedy duo, The McKenzie Brothers perform their stumbling and confused rendition of a holiday classic. Hoser accessories such as beer, back bacon, and toques replace the original song’s golden rings, French hens, etc. Endless fun. Last year, a full animated video (see below) was made for the song in preparation for the long-awaited Bob & Doug animated series which aired in 2009.

12) Grand Buffet – “Stocking Stuffer”
Grand Buffet are a Pittsburg-based rap duo specializing in synthcore beats and head-scratching, mirth-making rhymes. This tale of one young man’s encounter with Saint Nick is sure to warm your heart. Get the EP, Pittsburg Hearts HERE.

13) Tom Tom Club – “Il Est Né”
The funky, dancey husband-wife team of Talking Heads members Chris Franz and Tina Weymouth present a chill rendition of a traditional French Christmas carol. In 2002, “Il Est Né” and another track, “Christmas in the Club”, were made available for download on Tom Tom Club’s website. The tracks were taken down after the holidays passed and didn’t return again until 2007, when they released a single called Misletunes. The single features both tracks and the CD version features two additional mixes of “Christmas in the Club”.

14) Kate Bush – “December Will Be Magic Again”
A magical Christmas song from the likewise enchanted Kate Bush. It appeared on a single in 1980 and has appeared on finer Christmas compilations ever since. There are two versions. The version featured on the Holiday Feast favors a caroler sound, while the other rendition has a more minimal production and starts with chanting. The latter was featured on the 1979 BBC television event, The Kate Bush Christmas Special, you can watch that clip below. The TV special has recently been rebroadcast on the BBC, but a commercially available version has yet to surface.

McKennitt spins the words of Canadian poet Archibald Lampman into a Celtic ballad of wintertime beauty. What better expression of Christmas’ roots than a pagan-esque worship of nature and perhaps the winter solstice?

Continuing comedic variations on the holidays, we move to the master of musical comedy: Weird Al. “Christmas at Ground Zero” aptly plays upon the 1980s’ paranoia of impending nuclear holocaust and attempts to dress up the scorched black remnants of humanity with tinsel and Christmas cheer. Truly there’s a bright side to everything.

The lesser-known of Run-D.M.C.’s two Christmas singles. The first was “Christmas in Hollis” (1987). “Christmas Is” was released in 1992 and is a fantastic product of its time, discussing the consumerism of the holidays. A choice example is the kid’s Christmas list at the end: “yeah, that’s right – give up the dough. I want my Ninja Turtles, I want my bike, I want my Sega Genesis, I want my Nintendo, and turn my mommy lights back on!”

A compelling synth-rock version of the most famous Christmas instrumental of all-time from the band best known for having had Jason Schwartzman as their drummer and writing the theme song to The O.C.

20) Ben Folds – “Bizarre Christmas Incident”
Piano-rocker Ben Folds details a none-too-pretty encounter with the corpse of Santa Claus on Christmas morning. Allegedly the song was composed for the Grinch film, but was turned down. Too explicit? Perhaps. This song first appeared on Maybe This Christmas, a counter-culture Christmas compilation that lasted three albums between 2002-2004.

21) Shogo Sakai – Snowman
Every installment in Shigesato Itoi‘s Mother (aka Earthbound) series, has featured the “Snowman” theme composed by Keiichi Suzuki and Hirokazu Tanaka. It’s been reworked several times in the past. This version appears on the soundtrack to the final installment of the series, Mother 3, and was arranged by that game’s composer, Shogo Sakai.

From The Band‘s 1977 album, Islands. “Christmas Must Be Tonight” is a soulful retelling of the birth of Christ. No gaudy evangelicalism, just beautiful music and a tale for the ages.

And so ends the album with an easy-going meditation of harmonies and jingle bells from Southern rockers My Morning Jacket. This song if off their Christmas EP, My Morning Jacket Does Xmas Fiasco Style, released early in their career, between their first and second albums. 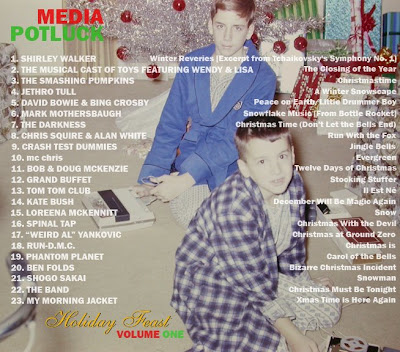