Episode 201 :: State of the Empire – The Force Awakens 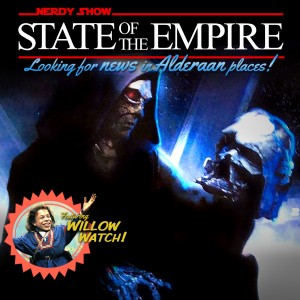 There has been an awakening, folks!

Episode VII has a title and a snazzy and much-debated teaser trailer to boot! What’s more, the Internet was treated to a veritable buffet of leaked production art which appears to be 100% legit. State of the Empire has always been about rampant speculation based on the most miniscule of details  – never before have we been given so much powerful ammo to work from. Some of our crackpot theories might even be right this time!

Join Cap, Doug, and Matt as we ponder the nature of Sith and Jedi in a universe where Star Wars history as we know it has been undone. Has the old Expanded Universe truly been wiped clean, or do those “legends” from the Star Wars universe offer clues as to what’s to come? Will one of the most infamous names in Star Wars lore be making his cinematic debut? What exactly are our thoughts on the controversial new tri-saber?

That’s just the tip of the iceberg, nerf herders! We’ve also got trans-media secrets of the Death Star,  thoughts on Luasfilm’s new project, Strange Magic, and some Willow merch you never knew you wanted – Don’t even wait to search your feelings, press play now!

Discuss this episode on the Nerdy Show Forums

Posted in: Nerdy Show 2014 State of the Empire

Tagged: State of the Empire