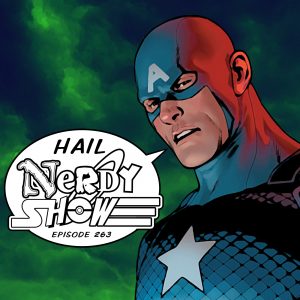 The tables have turned in the comic world! DC Rebirth is hitting comic fans in the feels and potentially heralding a new era of the much maligned comics company cleaning up the grimdark mess they’ve made. Meanwhile, Marvel has incited the rage of fair-weather fans with a shocking Captain America cliffhanger that’s solicited death threats and become a meme sensation.

Join Cap, boR, Trench, and special guest host, Stevo of Friday Night Fanfiction as they take on the comics controversy. Discover the cinema sensation that Stevo is woefully late to, be warned about shady tech crowdfunding, sample some of the finest sexy spam, and learn how to torment Tony with fire.