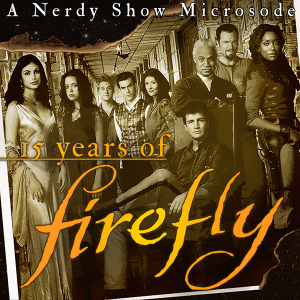 15 years ago a television show lived and died, but in its single season rocked the ‘verse of geeks everywhere. Joss Whedon’s Firefly is still one of the greatest sci-fi adventures to ever straddle the small and big screens.

Join Cap, boR, Trench, Jon, and Doug – four longtime fans and one nonplussed nerd who doesn’t get the hype – for a listener-requested episode where we reminisce about the series, Serenity, the comics, and the fandom at large. For fans old and new, we think you’ll agree, it’s a mighty fine shindig.