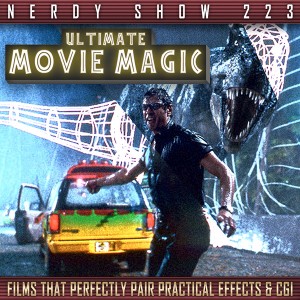 Jurassic World is out in just a couple weeks. While many are in heated debate over whether that film is going to be pure cinema fun or another prehistoric nightmare, there’s one thing we can’t deny: the original Jurassic Park was a paradigm shift in the world of film making.

The impact of computer generated images on the film industry has obviously been monumental – especially for nerd genres like sci-fi and fantasy. The impossible can come to life! But, despite the words of famed mathematician Dr. Ian Malcolm, “life” doesn’t always find a way. Now that CGI is common place, cinema is littered with less than lifelike animation and even what was once glorious doesn’t always hold up under modern scrutiny. Cinephiles agree: the best way to use CGI is sparingly and in tandem with old fashioned effects like miniatures, bigatures, animatronics, and stop motion.

Join Cap, La Valle, Doug, and Matt for this fan-requested Nerdy Show microsode where we discuss films that, like Jurassic Park, blend computer graphics and practical effects for a seamless (and timeless) viewing experience. Thanks to BigBadShadowMan for the episode topic!