Jurassic World, the upcoming 4th installment in the Jurassic Park film franchise, has the entire Nerdy Show Network split right down the middle. One camp sees Chris Pratt and his raptor pals as an affront to everything that made the original film a cinematic milestone, while the others see it as a sign that the Jurassic Park franchise has simply evolved into a different kind of blockbuster. The debate has been raging behind closed doors, but as shameless exhibitionists we’re taking it public. After all, grief finds a way.

Nerdy Show’s Live Producer John La Valle sees the film as an entertaining way to breathe new life into the popular franchise. Heck, he recently penned an article touting a real world journey to the the park as the ultimate vacation experience [“5 Reasons Jurassic World is On My List of Places to Visit Before I Die”]. In the other corner is Nerdy Show host Doug Banks, one of our resident film buffs, who simply can’t abide by how far this new installment strays off-course. They were already at each other’s throats, but the spark that ignited their bloodthirsty debate was the hybrid dinosaur Stegoceratops.

The film features at least one hybrid dinosaur: the lethally intelligent killing machine, Indominous Rex. This Hasbro mash-up of the Stegosaurus and Triceratops was recently confirmed by Screen Rant to be just a funky toy; but still begs the question of Jurassic World, “what kinda dinosaurs have they cooked up in that lab?”

LA VALLE: It’s not in the movie, it’s just a toy. The quote in the trailer says “our first hybrid” in regards to the i-Rex, so there isn’t likely to be any others. Also, assault raptors named Delta and Echo – Fuck yeah.

DOUG: The fact is, this poor bastard chunk of plastic wouldn’t even exist if the focus of the film was on treating dinosaurs like real animals instead of what would make a “cool toy” with “XTREME DINO ACTION”. I’m not hoping the movie fails, but I can’t help but feel disappointed that it’s ignoring what made the original so special. It’s the same mistake that Jurassic Park 3 made, but on a larger scale. One thing that could totally save it for me, is if Chris Pratt’s character is the voice of reason throughout the film – Like Malcolm. He says in the trailer it’s, “probably not a good idea.” If there’s more where that came from, then I can work with that.

LA VALLE: This is going to get kids interested in genetic science, man. Heck, this is the byproduct of kids from the last generation getting into historic genetics. Also, not every film has to be educational. Sometimes kids need to be kids and watch a dude ride a raptor to hunt down a super soldier T-Rex. Kids have lost their imagination and this could be a step in the right direction. Clearly some adults have lost their own imagination and childlike wonder…

DOUG: This will “get kids into genetics” the same way Godzilla got kids into marine biology. Jurassic Park wasn’t educational, but it had a focus on realism that made it believable, thrilling, and entertaining for people of all ages. Especially expert paleontologists. It got the whole world talking about real dinosaurs.

LA VALLE: Doug, you haven’t even seen this film’s version of the “Dino DNA” pitch.

DOUG: If anything, making new “monster dinos” shows a lack of imagination. They couldn’t think of anything cool to do with REAL dinosaurs? Please. I’m already feeling like a hypocrite for talking shit before the movie is out, but my doubts are just stacked because of the people involved. They’re not exactly the same caliber of genius as Steven Spielberg, Michael Crichton, or Stan Winston. 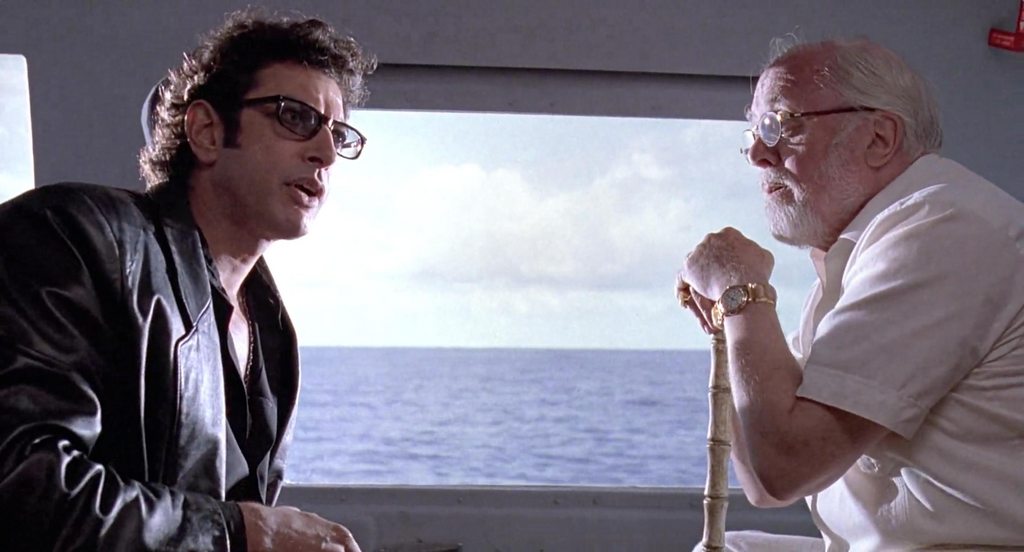 LA VALLE: The original film was ridiculous. DNA genetic material wouldn’t be viable even if you could extract what surely would’ve dried up. Just as dumb as making a new dinosaur.

DOUG: Doesn’t that make it all the more ridiculous to mix up a dino DNA cocktail and have it actually walk around as a living thing? That’s what I’m getting at: a failed attempt at recreating actual dinosaurs is one thing. Inventing a whole new fully-functioning species with the spare bits left over? That’s too much for me.

LA VALLE: Technically, since all of the dinosaurs in the original were spliced with frog DNA, that would mean that they were all hybrid dinosaurs themselves. That’s why they switched sex. The original movie was about frog/T-Rex hybrids.

DOUG: Yeah, and that was an important plot point to the movie. The frog DNA hybrid was the downfall of the whole operation. “Life found the way.” Hence why it was even in the story to being with.

LA VALLE: So what’s the difference? It’s the same thing – if anything, you can say InGen didn’t learn and that’s annoying.

DOUG: InGen “not learning” from their numerous mistakes is annoying because it’s unrealistic. Frog DNA + Dino DNA = “Oh shit, we underestimated nature. It circumvented our plans to control it and we fucked up.” Frankenstein Dinos = “We’ve gotten bored with regular dinos, so we made new ones and now they’re eating us. We fucked up again, lolz!” It’s like when Terminator 3 pissed all over the themes of Terminator & Judgement Day.

LA VALLE: Maybe they thought it would be better to have more Dino DNA to push out the frog’s dominant traits.

DOUG: Doesn’t look like any of the dinos were “frog dominant” to me. But that’s why the first movie was about the illusion of control. Dr. Wu said they engineered all the dinosaurs to be female, guaranteeing control over the animals. Didn’t work and people died. Now 20+ years later he’s back in the same lab, on the same island, cooking up some freak of nature like it’s no big deal. Doesn’t this sound stupid to anyone else?

LA VALLE: Seems we forgot IT’S A MOVIE. If InGen didn’t fuck up what would the movie be about? A documentary about churros?

DOUG: Sure, it’s a movie. But if it doesn’t make sense, then it’s a wasted opportunity to make something worthwhile. What would the movie be about if InGen didn’t fuck up? Anything! InGen doesn’t always have to be involved. The park doesn’t need to be rebuilt or reopened. After the events of the last two movies, the whole world would be trying to get involved. You could take it into any action or political direction you like, and it could still make sense. 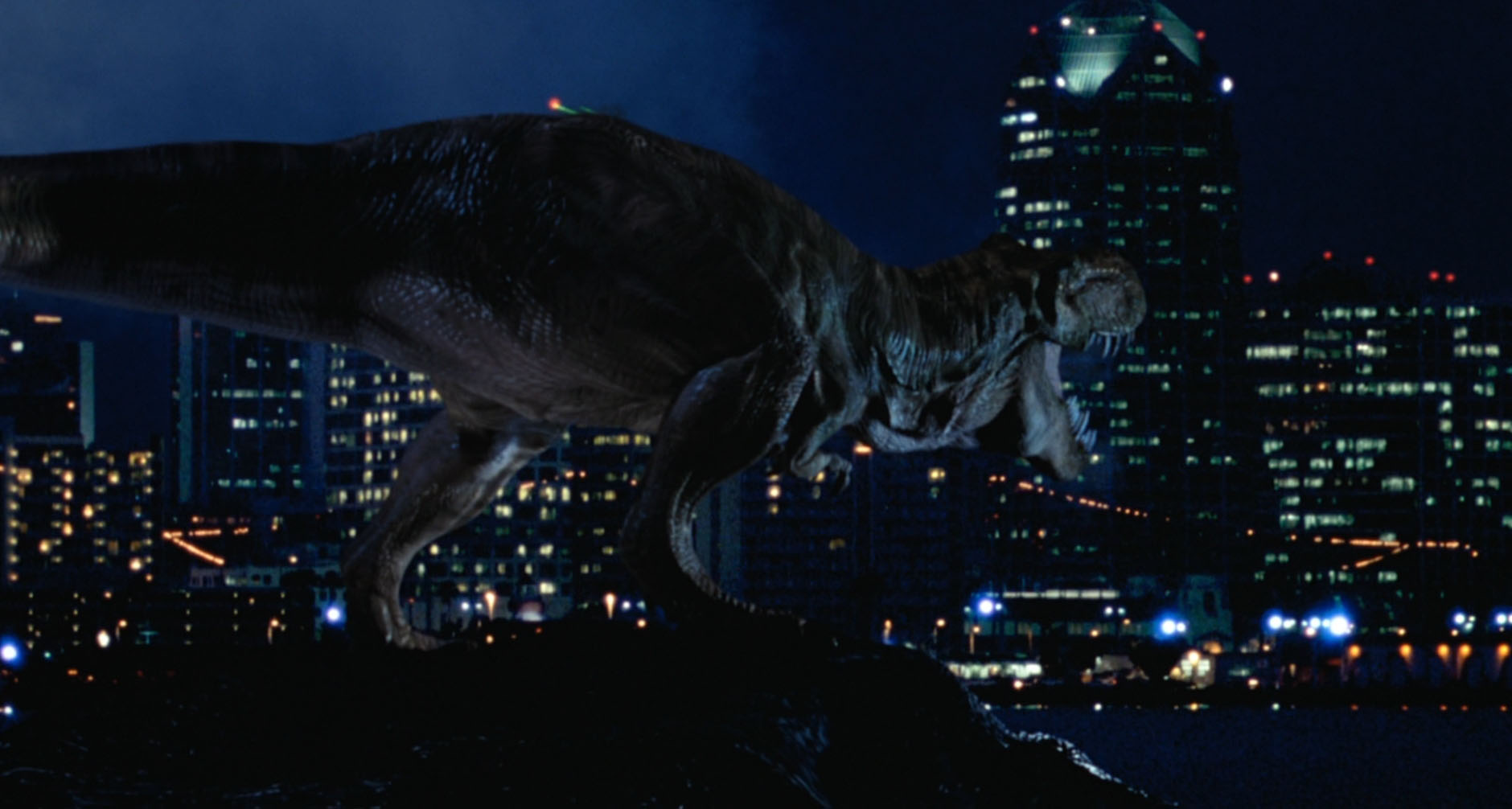 LA VALLE: None of the original made sense and it was amazing. Again, you’re forgetting the franchise’s excellent Dino DNA suspension of disbelief approach: frog DNA, viable Genetic material from amber fossilized mosquitoes (who disgust the DNA down into proteins to make eggs). Totally makes sense.

DOUG: Yeah, and only one of the originals was any good. And it “made the most sense” out of all of them.

LA VALLE:  It’s always been InGen’s game plan to do manipulation of DNA – all genetics companies want that. It’s the sorcerers stone.

DOUG: In the first movie, the park was still mostly a secret. Then the second one ruined that by having the Rex run through a city. Now, the whole world knows about it, and there are probably a lot of people pissed off at the shaky morals of InGen. Not to mention they must have lost countless billions of dollars. How the hell did they get over the negative PR, court battles, and endless civil suits to convince the board of directors it was a good idea to try it all over again? It’s like InGen had a huge investment in this park happening, and once it FINALLY got working, they were like, “what could we do to fuck it up again?” Yeah, it’s just a movie, but it doesn’t present a convincing fiction. JP1 at least had a sense of “maybe”.

LA VALLE: It’s also the ultimate horror story of how corporations can do what they want. They’re based in Costa Rica or at worst, considered their own sovereign land like Native American casinos.

DOUG: Above everything else, corporations care about MONEY. Not mad science. And they were in America when civilians were eaten by a Rex on the loose. Where’s the money in a twice-failed theme park with million dollar animals? Look at nuclear energy in the United States. Everyone cites Three Mile Island and Chernobyl as reasons why we shouldn’t do it. Those incidents were decades ago and there is still a stigma about nuclear power plants. Now imagine if a pack of wild dinosaurs got loose, and it was one corporation’s fault.

LA VALLE: Just imagine what you could sell investors with proof of living dinosaurs. There’s been a few calamities, sure – but the tech possibilities! Inexplicable mergers and exceptions based on market manipulation happen all the time.

DOUG: If Jurassic Park is “Jaws on the land,” then Jurassic World is Jaws 3-D.

LA VALLE: I want a GoPro strapped to your face so I can pinpoint the moment you realized you were wrong, and that everything you know about yourself is deceptively incongruent with the outside world.

DOUG: It’ll be hard to see if I’m “right” since the movie is still months away. Jurassic World could be great. I just really really doubt it. It gives me no pleasure to see a shitty Jurassic Park film. If it’s good, I’ll be among the first to sing its praises. Let’s not forget that the reason we’re in this pickle in the first place is because we’re fans. It’s just… God, I hate being right all the time.

Jurassic World releases June 12th and no doubt this debate will rage ’til then. Want to hear more of Doug’s case against the film? If you’re a supporter of the Nerdy Show Network Patreon, you can check out an exclusive episode about our reactions to the Terminator Genysis and Jurassic World trailers right here. Let loose your passionate reactions to hybrid dinosaurs or your excitement for the film in the comments below!