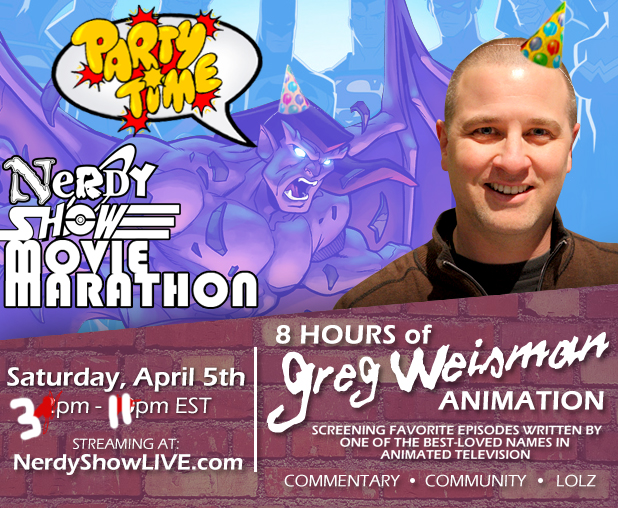 It’s time for another Movie Marathon! here!  And this time we’re throwing a Greg Weismanathon – Over 8 hours of action-packed animation from the pen of Greg Weisman, the brains behind Gargoyles, Young Justice, The Spectacular Spider-Man and author of some of the best dramatic animated television of the past two decades.  This Movie Marathon is fan-demanded and features a greatest hits selection from Greg Weisman himself!

So come party with the Nerdy Show crew online, hang out in the chat, and catch any hijinks that ensue.

Saturday, April 5th from 3pm-11pm Eastern we’re going to be streaming the festivities at our live hub, NerdyShowLive.com.
Stay all day or tune in during your favorite shows.

As these shows are under copyright protection, you’ll be checking out our sexy mugs as we provide a running commentary on all the programs we view. Many of these titles are available via either Youtube, Netflix, or Amazon Instant. Before you settle down to watch these films along with us, you’re going to want to figure out how you’ll be viewing them. We’ve provided links to help!