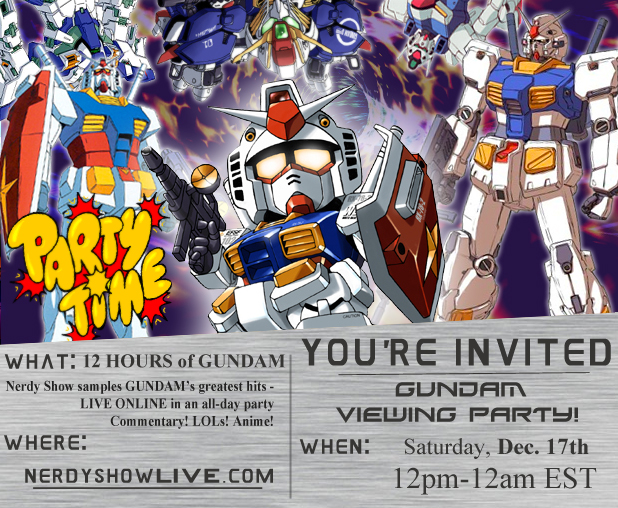 Are you ready for another MOVIE MARATHON!? In October we tried out our first Movie Marathon with Gamera as a part of our forthcoming Nerdy Show Prime episode on the topic of “Giant Monsters and Their Natural Enemies”. Now we continue in a variation on that theme: GIANT ROBOTS! Gundam to be precise. The biggest giant robot series of all time (literally and figuratively).

Saturday, December 17th from 12pm-12am Eastern we’re going to be streaming our festivities at our live hub, NerdyShowLive.com.

Thanks to the curatorial efforts of Kaosubaloo and Gundamking we’ll be viewing exclusively Gundam films and series that are public domain or otherwise 100% legal for us to stream!  Many of us will be seeing these Gundams for the first time, so get ready for some reactionary commentary and antics!  Come party with the Nerdy Show crew online, hang out in the chat, and catch any hijinks that ensue.

We’ll be watching them in the above order (viewing links coming soon). Get excited! Mark the date! Grab some Doritos!