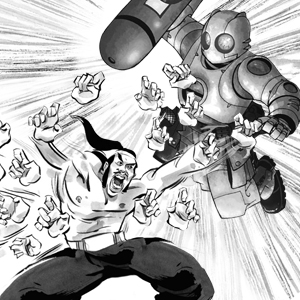 It’s comic book time!  Not too long ago we did an episode focusing on comic movies, but it’s been a while since we really got into it with comics.  There’s plenty of stuff going on in Marvel and DC what with the new Spider-Man, Marvel’s Big Shots, and the world-altering Flashpoint event and we touch on all that good stuff – but that’s not the main event.  This episode we fantastic interviews with some incredible indie talent.

First up is Kagan McLeod who’s recently-released graphic novel, Infinite Kung Fu, will shatter your rib cage with its otherworldly martial arts awesomeness.  We talk with him about how his book rose from a self-published single-issue to a massive graphic novel, Chinese mythology, and more. Have a look at this trailer for the book and perhaps you’ll understand the power within its bindings:

Then we turn the interrogation lamp onto our very own Mr. Brian Clevinger and for the first time ever, Atomic Robo artist and co-creator, Scott Wegener.  The latest volume of Robo has been collected, another is about to begin, and there’s a second series looming on the horizon – so suffice it to say we have much to discuss with these dastardly devils.

Our latest Minecraft contest is going on RIGHT NOW!  Click the image above to take you to the contest page for the rules and regulations, and GET BUILDING!