Hey gang!  As you may have seen, Tony and Triforce Mike slaved away for the duration of 24 Hour Comic day this past weekend –  and it was a success!  At the end of the day, all 24 pages of the comic had finished being drawn and 7 of the pages had already been inked and lettered.  The comic is called Axe Chick it’s about a hot chick who has a battle axe and kills things with it.

This week Tony’s going to finish up Axe Chick, so no Nerdy Strip.  A 24-page comic over a comic strip, that’s more than a fair trade, no?  And as for that slick custom t-shirt Tony was wearing that he and I drew all over, word on acquiring those dope threads will be posted shortly.  In the meantime, here’s a preview pic of Axe Chick: 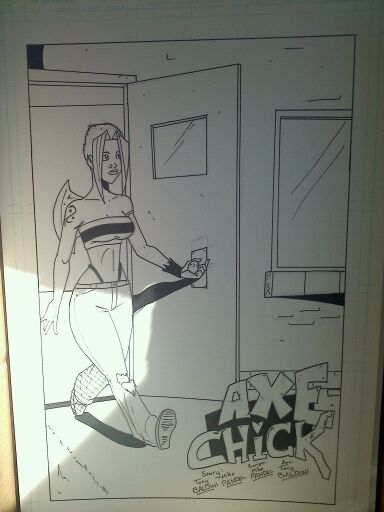