Season 4 Episode 67 :: State of the Empire – Looking for News in Alderaan Places 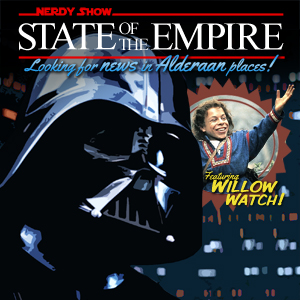 It’s only been three weeks since the announcement of Disney’s purchase of Lucasfilm and the continuation of Star Wars – and already more news is flooding in.  Episode 7 comes out in 2015, we couldn’t just sit here. We had to do… something.
Presenting State of The Empire, Nerdy Show’s ongoing Star Wars speculation series.

Join Cap, Hex, Doug, and Marc with a C as we put the pieces together of just what Episode 7 might be about, who’s confirmed to write the script, what actors are in, which directors are out, and put clues together for who we think could be involved.  We’ve got some real mind-blowers here.

Posted in: Featured Season 4 State of the Empire