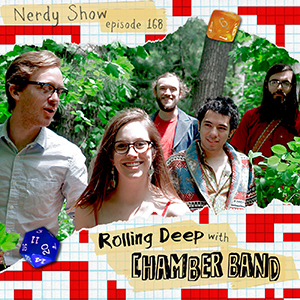 It’s RPG Month!  That means we’ve got a slew of programming focused on the craft of tabletop roleplaying and the people it’s inspired.

In this episode we’re joined by Chamber Band a folk rock outfit whose tales of heartbreak and dire deeds are all set in the world of Dungeons & Dragons.  If their name rings a bell it might be because their debut album, Deities, rocked our world in 2013 and placed #6 in our annual Top 20 Things list! What can we say – they’re good, and we don’t mind talking ’em up!  Chris and Asarr of Chamber band team up with Cap, Hex, Doug, and Josh to discuss the world of tabletop, stories from the game, and (perhaps surprisingly) Pokémon!

We also mash this episode up with a Microsode topic!  Nerdy Show listener, M wanted us to talk about the RPG phenomena of “munchkins” – the slang for aggressively competitive RPG players.  We share our experiences conquering and subduing the beasts, or even accepting the munchkin within us and using its powers for good.