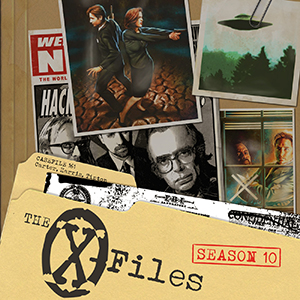 The X-Files is back!

The FBI’s unsolved case files have been reopened in a 10th season continuing Mulder and Scully’s quest for the truth – a comic book executive produced by series creator, Chris Carter. The first collected volume comes out this week and we’re joined by the entire creative team: series writer Joe Harris (Great Pacific) editor Denton J. Tipton, and Chris Carter for their first joint interview and an all-X-Files episode!

The X-Files is one of the most prolific TV shows of all-time – a cultural zeitgeist, and in many ways a contributing factor to the world becoming a nerdier place.  When the series ended there were still myriad questions, and Season 10 is every X-Phile’s long-awaited wet dream.  Cap is joined by guest host X-Fan specialists: Nina Bernardakis from Ghostbusters: Resurrection and Mike Roffman from Consequence of Sound and Time.com for a journey into the unknown.  They learn the origins of the comic, it’s canonical place with the rest of the series, how the often-rumored 3rd X-Files movie fits in, and about the upcoming annual written by X-Files writer/ producer Frank Spotnitz and Ten Thirteen’s Gabe Rotter.  The Nerdy Crew also discusses our favorite episodes, the series’ lasting impact, chilling conspiracies, and our own real-life paranormal encounters.

Discuss this episode on the forums