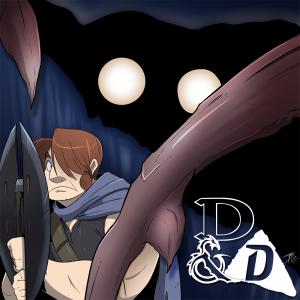 Our party bravely ventures into realms where even Northlanders fear to tread in hopes of finding a Dwarf to do them a solid. So it’s off to the treacherous, geologically active region called “The Dragon’s Bed” to hunt for some answers. Unfortunately there’s something much worse than geysers bursting from the ground:  an inexplicable horror is on the prowl and leaving puddles of corrosive goo in its wake. Good thing Jamela, Barty and Lefty brought along a new pal!

Introducing a musclebound duckbunny of a Northlander named Bogo; played by Ghostbusters: Resurrection‘s Doug Banks! If the party can just stop arguing long enough, they might be able to make it out alive.