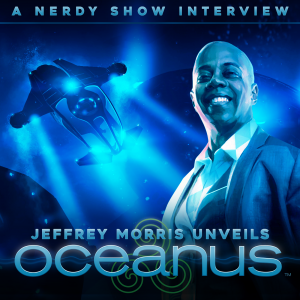 on the latest geek news and happenings, we’re diving deep into super-specific discussions and interviews.

We’ve had an influx of cool, thought-provoking sci-fi films lately, but few of them have had much integrity when it comes to the “science” in “science fiction”. Fortunately, we know a guy who’s on a quest to change all that. Meet Jeffrey Morris, head of FutureDude Entertainment, and the writer/ director of the upcoming film, Oceanus. With Oceanus, Morris is creating a near-future world of deep sea exploration, moon bases, and asteroid mining; advised by such science luminaries as Neil DeGrasse-Tyson… and then he’s setting that world on fire – literally.

With the surface of the world consumed by catastrophe, the only remaining bastion of human civilization on Earth is the sea base, Oceanus. The film will explore that gleaming science city beneath the waves as the apocalypse sends it into disarray; and then the advantageous director is launching a 10-part TV miniseries to continue the story. Along for the ride is legendary Star Trek writer D.C. Fontana and Fringe and The Wire‘s Lance Reddick. Cap and Jess have been granted exclusive access to the feature film script and are joined by Morris for a revealing exploration of this unprecedented undersea adventure series, his sci-fi influences, the science that makes the show tick, and how this exciting and expansive project came to be!