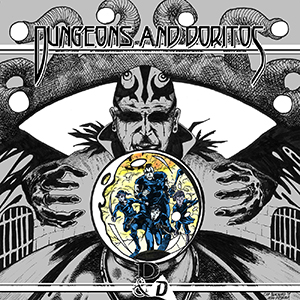 The lovable rogue Barty has been imprisoned.  It’s up to his old “friends” – Vimak, the noble Goliath, Jamela, the sensual Dragonborn, and Lefty, the pirate queen, to bust him out of the slammer.  But Barty’s incarceration isn’t the country club variety.  He’s been tortured by a disturbing man with devious plans and is being taken to see the ominously named “Head Man”.  Can the rescue party break into the most feared prison in the realm in time to save him?  Will they come to their senses and leave Barty to rot?  And if they break in – can they ever break out?

New to the series? This is a great place to start!  Join Cap, Hex, Colin, Lefty, and your Game Master, Ruel as they triumphantly return to Doritodonia – a realm of adventure, peril, and crunchy corn chips. All-new Dungeons & Doritos are coming your way every other month.  Want a recap of the story so far? Check out the Book III Prologue for a quick catch up, or hit the archives and experience the full adventure.