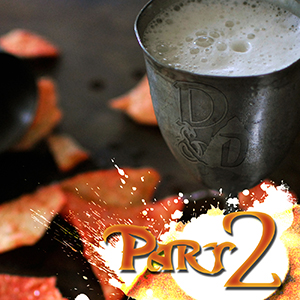 The Dungeons & Doritos Book III Prologue concludes! It’s a two-part special recounting the story so far and setting in motion the events that launch a new chapter in our heroes’ journey.

Barty Gleem’n persists in fulfilling his bargain for free drinks with the barkeep: spinning the most amazing tale he’s ever heard – the story of how this strange party found themselves in this very pub!  The story continues as Vimak the Goliath, Chair the dwarf, Jamela the Dragonborn, Lefty the pirate queen, and Barty himself fight through war-torn lands to free Jen’Ifer the Tiefling.  It’s a quest that puts them face-to-face with a malevolent force that’s been hunting them since Barty joined up, and a journey with terrible prices to be paid.

The D&D cast, chips and drinks in hand, gather ’round an honest-to-gods drunk Barty as he  wraps up this prologue and sets the new Book in motion.

This episode was conceived by D&D fan Bryce Harris. He originally requested it as a Microsode – but we liked the idea so much we made a thing out of it! Thanks to Bryce and all the amazing fans who brought us this far.