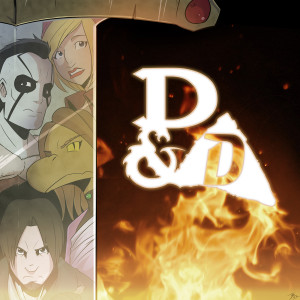 Our heroes are in dire danger! Ever since Vimak, Jamela, and Lefty broke their comrade Barty out of prison they’ve been pursued by the nefarious bounty hunter, Black Pepper Jack. Jack’s got some serious beef and Barty’s got a whopping bounty on his head, but now that the party is surrounded, things have taken an unexpected turn. Some explaining is in order!

Diplomacy isn’t the D&D crew’s strong suit, but they’re under the sword and unprepared for this delicate predicament. Will Barty’s sordid history finally catch up with him? How far will the party go to evade Jack’s smarmy clutches?  Their mission, should they choose to accept it, will take them on deadly ground – deep into the heart of Doritodan, capitol city of the land, where something has gone very, very wrong.