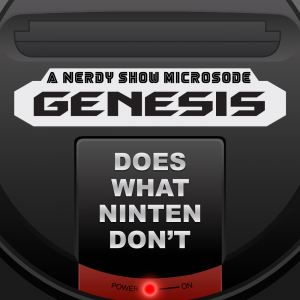 Ah, the holidays. That magic time of the year when your parents are most likely to cave in and buy you something super-expensive. If you’re on this website, chances are good that more than once that premium gift was a gaming console. But when you peeled back the wrapping, what was underneath? In the early 90s, the console you had was more than a portal to indoor adventure – it was a way of life. Were you a Nintendo kid, or were you a radical, shades and denim wearin’ embodiment of coolness: a Sega kid?

Join clean-cut Nintendo kids Cap and Brandon, and too kool 4 skool Sega kids, Wicked Anime‘s Andrew and Jonathan, as we revisit the console wars and an insane era of home entertainment experimentation. With the Genesis, Sega tried out every absurd concept they could think of to push the medium one step farther. You could trick out your Genesis with a Master System adapter, the Sega CD, 32X, 3D glasses… and that’s just for starters. In this episode we discuss Genesis culture, the games, the portables, the hardware, and freaky franken-systems you never knew existed.

Thanks to Anthony Rubbert for this Microsode request!