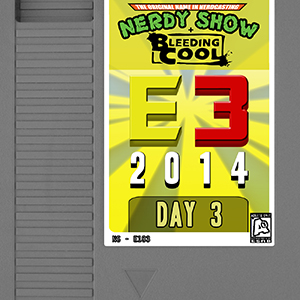 It’s the final day of E3 2014 and there’s no shortage of new game experiences for us to cram in before the show closes for another year.

We got a closed-door look at Rocksteady’s return to the Batman/ Arkham franchise: Batman: Arkham Knight (as well as a look at some kinda freaky Green Lantern redesign), saw the ultra gory and super-awesome Fatalities and features of Mortal Kombat X, peeped a Zelda-inspired Adventure Time game that takes place in recent continuity, and discovered what might be a secret gameplay demo of the upcoming Star Fox for the Wii U on the show floor.