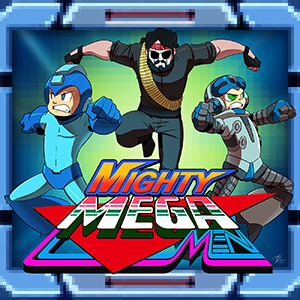 Featuring interviews with The Protomen, Capcom’s Brett Elston, and Charlie from Fangamer!

Big things are brewing in the fandom of everyone’s favorite blue robot. Capcom Unity just announced a musical olive branch to the Mega Man community with two albums of Mega music – including new music by your favorite robot-themed nerd rockers and rappers, as well as Over-Clocked Remix.  And what’s more – Keiji Inafune, the man behind the helm of countless fan favorite Mega Man titles, is back with is own robot boy: Mighty No. 9!  The new game is on Kickstarter and is already one of the biggest fan-funded games of all-time.

We talk with Brett Elston, Community Manager at Capcom Unity: the brain behind the forthcoming Mega Man albums, Charlie Verdin of Fangamer:  the amazing merch-smiths who are lending their skills to Mighty No. 9, and Murphy, Commander, and Panther of The Protomen: the Mega Man-inspired post apocalyptic rockers caught between both projects.  We discuss the new Protomen track, get hints at the secret of their other tracks on the record, and other juicy details about the Capcom albums, as well as the Protos’ theoretical involvement with Mighty No. 9.  What’s more, Charlie talks new Mighty No. 9 merch details, reveals Brutal Legend merch by Fangamer, and hints to some big Earthbound and Pokémon related releases in the future.

Join Cap, Brandon, Jonna, Doug, and Josh as they share their favorite Robot Masters, why we love Mega Man, drop some truth-bombs about Neil Young, and discusses Inafune-san’s awesome-looking new game.  This episode started life as a Microsode requested by Arkais and grew Mega-sized.  Thanks, dude!

What was that music “thing in October.. with a bunch of bands I wanna see” Brett was talking about? Why, it’s NERDAPALOOZA!