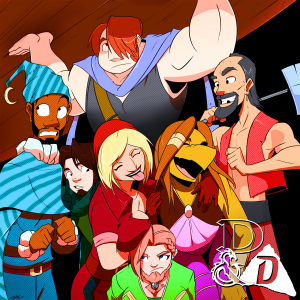 Our heroes have themselves a flying boat! …Kinda. It’s a start. But unfortunately the dwarf who made it possible is none too happy about having her skills put to use by Northlander brutes and is fixing to fly the coop. That, coupled with new problems with Palaver, have the party hustling to navigate choppy social waters – and we all know how good they are at that!

Barty, having boned up on his wolfen ways, is determined to return to Doritodan and conquer the lycanthrope who gave him hair in strange places. Lefty and Jamela are hellbent on returning to the Isle of Mages in hopes of gathering reinforcements. Shovel Guy wants to bury Black Pepper Jack. And Bogo… he’s blissfully unaware of his friends’ complex problems, but that’s not going to stop him from getting tangled up in the mess they’re making.