Nerdy Show Interview: Marc With A C Gets Shock Treatment 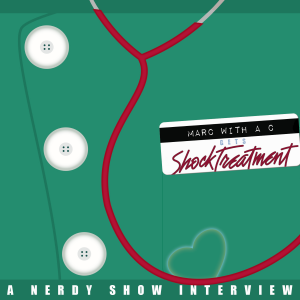 Before there was “reality TV” there was Shock Treatment – a side-step sequel to The Rocky Horror Picture Show that confounded fans and slipped in under moviegoers’ radars in 1981. No sweet transvestites here, just Brad and Janet trapped in a televised torture chamber that looks eerily like America in the 21st century. The film faded into obscurity, where it would’ve languished were it not for some die-hard fans, among them the lo-fi musician and familiar voice here on The Nerdy Show Network, Marc With A C.

In this episode, Marc and Cap share everything you need to know about this hidden gem of b-movie musicals: the actor strike that led to massive changes in the plot, the fandom that re-discovered it, and the weird story of how Marc’s just for fun covers of the songs turned into a beloved piece of the Shock Treatment legacy (now being pressed on vinyl to coincide with the Blu-ray release). We also have a Rocky Horror bombshell to drop as Marc’s journey to license these songs shed some light on the long-rumored, often-denied follow-up film, Revenge of the Old Queen.