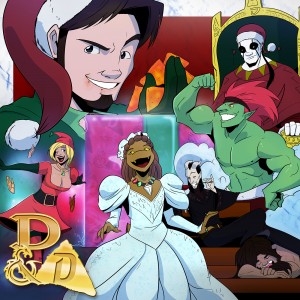 ‘Tis the merriest time of year, ’tis Crunchmastime! What’s Crunchmas?! Why, you poor devil, Crunchmas is a festival of giving – when all the land is flavor-dusted in a thin blanket of snow, friends sup upon the finest Doritos in front of roaring fires, and Doritodonia is awash in the sound of bells, singing, and occasional gas. So break out your rarest, imported chips! Fill your tankard with spiced, bubbling drinks! It’s time to party!

Join Cap, Hex, Colin, Lefty, Kyle, and Ruel for an opulent Crunchmas reunion. It seems like only yesterday our heroes were on the run, but now life is good and Barty is throwing the biggest party anyone has ever seen. There’s nothing suspicious about it at all…

Thanks to Sage0 and Frozentreasure who created this campaign as part of our Dungeons & Doritos Support Drive!