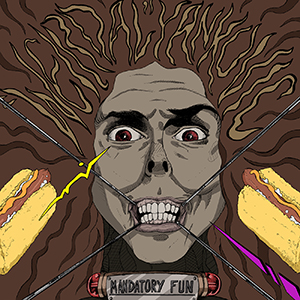 Like a prophet from the stars, or the burning of a zesty burrito, “Weird Al” Yankovic has returned to us.  Every few years its his solemn duty to warp pop culture to his comedic will, and over the decades he’s amassed a legion of nerdy followers.  Chances are likely that you’re one of them.

In this episode we speak with Weird Al, hot on the heels of his 14th studio album: Mandatory Fun.  This is the beginning of a new age of Al – he discusses leaving the conventional album format behind, what goes into composing his style parodies, the genesis of his new epic ballad “Jackson Park Express”, making crappy songs lovable, and hints to big plans for UHF. Join Cap, Hex, Doug, Tony, and Wall as they share their favorite Weird Al tracks and stories about how Al made their lives a lot weirder.