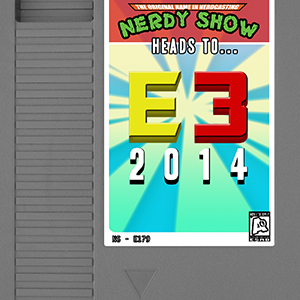 Next week, Nerdy Show will be in Los Angeles to cover E3 – the biggest video game event of the year. But before we do that and unleash daily podcasts and videos chronicling our hands-on experiences with all new games, we thought it would be apropos to get the conversation started.  And what better place to start than the rumor mill?

Join Nerdy Show hosts Cap, Brandon, and Tony along with our Live Producer John La Valle and our Community Manager Trench as we speculate on this year’s big gaming reveals.  Not many big-time next gen games have arrived yet and there’s plenty more on the horizon that we won’t officially know about until some fat-cat in a suit announces it at a press conference.  We try our hands at peering behind the curtain, and while we’re at it we also throw in our 2 cents on the new generation of consoles and review Supergiant Games’ Transistor.

Nerdy Show listener Barryeyi asked that we share our thoughts on the new consoles on the block, and now that they’ve turned 6 months old it seems like a good time to make some rulings on how we feel about the PS4 and the X-Bone (as we affectionately call the Xbox One). Opinions and rivalries are heated.  Will Brandon and his PS4 out smart-mouth La Valle and his X-Bone? How does the hedonist, Trench who rocks both systems compare?  Will Cap get a word in about the WiiU? E3 madness begins here!