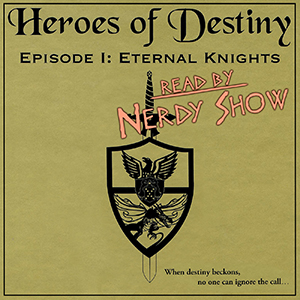 “When destiny beckons, no one can ignore the call…”

And so your beloved Nerdy Show hosts have been summoned by the power of the Microsode and the will of Nerdy Show fan, MrJMir. His request? We read from Kevin Wong’s Heroes of Destiny, Episode I: Eternal Knights.

Don’t be surprised if you haven’t heard of this momentous tome – it’s a self-published fantasy novel from the mystical land of Canada, and it’s god-awful.  Awful, that is, in the best possible ways.  Heroes of Destiny rivals Nicholas Cage in its nuanced brilliance. Every page is comedy gold.  Join the “Eternal Friends” Cap, Hex, Doug, and Josh as we read aloud this magnificent book and revel in all it’s JRPG-influenced glory.  This episode might be fleeting, but the laughs will last an eternity.