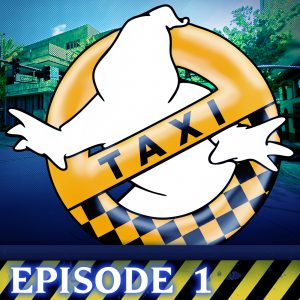 Bustin’ makes us feel good! Nerdy Show is very proud to debut the latest member of the Nerdy Show family: Ghostbusters Resurrection! If you like Ghostbusters, roleplaying, or comedy, you need to give this a listen.

America’s newest Ghostbusting franchise is officially up and running! But it seems like no one noticed since it’s been about three weeks, and the crew hasn’t received a single call. While the guys don’t mind sitting around the firehouse all day, if they don’t start getting some business soon, they’re bound to close just as quickly as they opened.

Thankfully, on a particularly boring day, the gang gets a call from the Orlando Police Department saying that they’re urgently needed downtown. A taxicab has thrown out its driver and passenger; and is currently driving itself! Traffic is backed up for miles, it’s almost rush hour, and this haunted taxi is showing no signs of stopping. At a time like this, who ya gonna call?

So now join us as our inexperienced Busters venture out on their first case. They don’t believe in Ghosts (yet), but that won’t stop them from busting. Did we plan the launch of this episode around Bill Murray’s birthday? If that’ll make your listening experience that much better… let’s just go ahead and say yes.