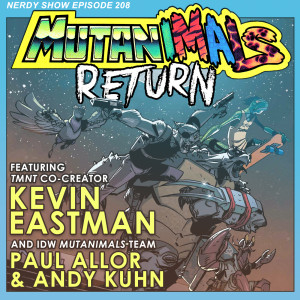 Fresh from the sewers! This episode is dedicated to the wildest creations to spill forth from the realm of science-fantasy: the Teenage Mutant Ninja Turtles and their incomparable supporting cast of mutants, misfits, and Mutanimals.

The Ninja Turtles has captured the minds of three generations of fans and counting. Whether you grew up on the classic black and white comics, the ’87 animated series, TMNT Adventures, the ’03 animated revival, or have just joined up with the current generation of Nick and IDW – chances are good you’ve been lured in by the series’ crazy adventures, weird humor, or gnarly characters at some point in your life. In this episode, we pick up our ongoing trek through the turtles-verse and talk with creators both revered and new to the scene.

Hear TMNT co-creator Kevin Eastman discuss the series’ legacy of characters and the many forms the Turtles’ universe has taken – from the Q&A we hosted at the ’14 Heroes Con. And hang out with writer Paul Allor and artist Any Kuhn – the  team behind the revival of one of the TMNTs most revered supporting titles: Mutanimals.

Join Cap, Doug, and Tony as we discuss IDW’s Ninja Turtles universe as well as the ongoing animated series at Nickelodeon. If you’re a lover of the “other strangeness” to come from TMNT like Mondo Gecko, Wingnut & Screwloose, Mutagen Man, Scumbug, Cryin’ Hound, Slash, Pizza Face, Verminator X… this one’s for you.