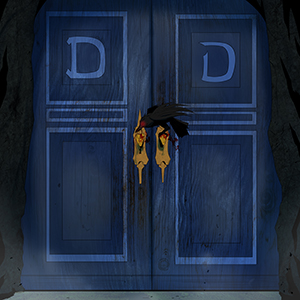 The dramatic conclusion to D&D Book II! Tolay is under siege and our heroes have formed an uneasy alliance with the agents sent to destroy them by the mysterious “Man in Black”. Across many lands and across time Vimak, Jamela, and Jen’Ifer have been called “The Worlds Enders” – but is it true? War is raging, casualties are mounting… The end may in fact be nigh, but these adventurers aren’t going down without a fight.

Once again our studio is packed! Special guests Ruby Darling and Rosita Sparkles of Skill Focus Burlesque and Kyle (aka Shinobi MC) return and, for the first time since we washed up on Corney Island, Lefty Lucy is in the studio!

This is the finale you’ve been waiting for.  Events set in motion long ago, now collide in one final chapter.

D&D has an original score! Created by Level 99, Ryan McQuinn, and Kyle Evan Bunnell aka the DnD Music Crew. Click the links above to download the tracks for free or pay what you like!

* Tracks in bold are new to this episode.

Want some exclusive D&D goodies?  $upport the show and you’ll get EXCLUSIVE AUDIO and access to the current D&D sketch gallery with episode-specific sketches by Tony and local-shop, as well as other cool stuff. Just click here to chip in! Every coin counts.