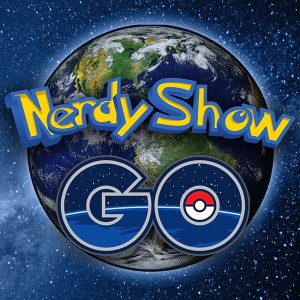 Every other week, The Nerdy Show Network‘s flagship podcast pours over the latest geek news and happenings!

It’s a weird, wild new world for Nintendo nerds. The Big N has announced their first push into the mobile games market (beyond their own hardware) and they’ve come out balls a-blazing. Pokémon GO brings Pokémon to Earth in an augmented reality experience that’s still very much under wraps. We speculate on what’s to come and how deep Nintendo can deliver on their pitch for a world teeming with cute, freaky creatures.

But that’s just the tip of the proverbial iceberg in this ill-fated pleasure cruise. We switch from A.R. to V.R. as we investigate THE VOID, a new company hoping to be the next big thing in interactive entertainment; discuss the dubious announcement of Animorphs, one of our favorite 90s book series, hitting the big screen; and critique the latest iteration of Starcraft.

Join Cap, boR, Luke, and Trench for all this and more, including another of Cap’s weird dreams and the return of our old segment, Luke’s Late to Everything! This installment: The Rocketeer!