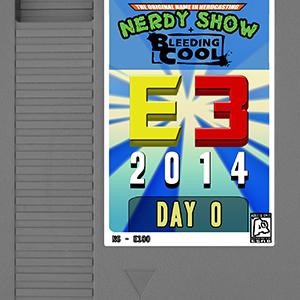 This episode of Nerdy Show chronicles Day Zero of E3: Four colossal press conferences where the stage is set for the next-gen goodies awaiting us when the show floor opens. Microsoft, Sony, EA, and Ubisoft vied for the favor of gamers everywhere and for those of us still holding out to decide between PS4 and Xbox One… the showings from today alone are likely to force your hand.

Among the biggest surprises was the the appearance of Brian Michael Bendis on the Sony stage to announce his comics blockbuster, Powers, will be coming to live action TV. Beyond that it was a gamer’s delight with new IPs from respected studios (Evolve, Sunset Overdrive), the return of old favorites (Batman: Arkham Knight, Crackdown), and stunning indie break-outs (Abzu, No Man’s Sky).

We share our first impressions of these debuts and many, many more – priming our minds and thumbs for what we’ll be experiencing in the days, and year to come: