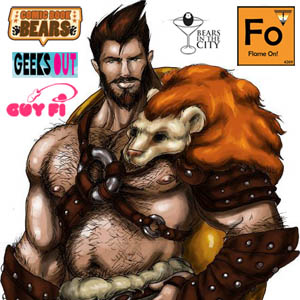 WOOF! ROAR!! cough, cough, Graaaaaaah! Hear ye, hear ye, may it be known that the first ever Flame ON! Bear Summit convenes on this day of Fall 2012. The parliament of bears are all gathered around the ceremonial picnic basket, ready to delve into the wild and wooly world of bear culture. Join Bryan (a bear), Pat (the sometimes talking bear-skin rug) from Bears in the City, Bill Z from Comic Book Bears, Jono from Geeks Out, and even our wild Australian bear Dean from GuyFi to talk of bear history, bear movies, bear body image, even bears in comic books!!

What’s a bear, you ask? Go listen to our Bears 101 microsode, then come right back and rejoin our summit already in progress.