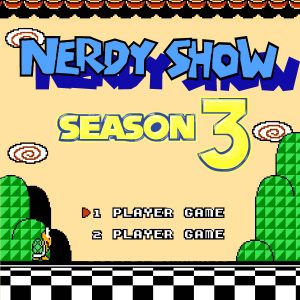 Only explosions and machine gun fire would have been appropriate fanfare for Nerdy Show season 3.  From January to August 2010 the gang went on a eight month-long nerd rampage.  Massive interviews, deadly new challengers, a world tour of geekdom – Star Wars Celebration V, Megacon, Nerdapalooza, and vidcasts on-site at video game ground zero: E3!  This season saw the rise of da Amber Lamps in the War of Light and the old man strength of Epic Beard Man, the resolution to the Tetris Rap Attack remix contest and the entirety of the Blackest Night Song Fight challenge, Rule /34/ was exposed, teen werewolves found their wolfdads,  and more insane lolz and roflz, and awesomeness than anyone could ever re-cap!

Prepare for NERDY MAYHEM the likes of which your monkey brain has never imagined!!!

Get all past and future episodes by subscribing to us on iTunes!