The original Ghostbusters Roleplaying Game was first published in 1986, the same year as The Real Ghostbusters cartoon. There may be no connection there, but the pre-packaged adventures often feel “cartoony” compared to the films, and some of the equipment (like car phones) are clearly out of date. If you’re running a light-hearted campaign set in the 80’s, this might be fine. But if you’re looking to start a modern day franchise with a tone closer to the films (or perhaps even grittier), then you’ll want to read some of our suggestions for new rules.

Additionally, the Ghostbusters cannon has expanded a great deal since the first film. Our updated rules add in familiar (and essential!) canonical Ghostbusters equipment like the Slime Blower, Proton Pistol, Dark Matter Generator, etc. These are divided into “Standard Equipment”; the kind of day-to-day gear any Ghostbuster would have access to, and “Special Equipment”; which your crew would likely have to buy in-game to expand their operation (see Equipment Order Form).  We’ve also created extra “Cheat Sheets” in case you need to quickly create campaign assets on the fly like new ghosts, locations, clients, and more! 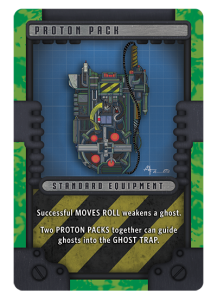 No Attack/Containment Settings:
The modern pack has only one setting. Your proton stream will automatically ensnare any ghost with zero Ecto-Presence.

* Once a Boson Dart is fired, the pack starts to overheat. If the player does not fire on their next turn, the pack will cool down to normal levels, and they’ll be able to fire another Boson Dart on the turn after that.

* On the turn after a Boson, if the player fires a standard stream, they’ll be unable to fire a Boson for another two turns while the pack cools down. Standard stream will still be available.

* If the player fires a Boson Dart for two turns in a row, the pack will overheat and shut down for the next three rounds. If a “Ghost” is rolled, the neutrona wand may be permanently damaged at the GM’s discretion.

Once a trap has captured a ghost and has closed, it cannot be re-opened without releasing the ghost contained within. The trap can capture and hold up to four spirits at once before automatically closing. Has a battery life of 12-24 hours depending on use.

Can now locate and measure PKE. When close enough to a manifestation, it can also recommend a classification (provided by the GM). 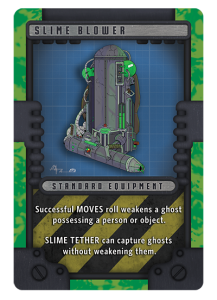 -2 Ecto-Presence on a ghost possessing a person or object. On standard ectoplasmic entities, it’s -1 to Eco-Presence and it drives the ghost away, like a “pepper spray” for spirits. Green Slime can also negate the presence of Black Slime. See “The Slime Spectrum” document for more info on how slime works.

Slime Tether:
When fired at two objects, it contracts, pulling with the strength of “4 Muscles” during the initial round fired, “2 Muscles” for the next round, then “1 Muscle” each round after that until it breaks. Tethering a ghost next to an open trap can allow the ghost to be trapped without lowering its Ecto-Presence if it doesn’t snap free.

Will show an image of the spirit possessing a person, or can reveal a person’s current emotional state. Although it can be used as a makeshift “lie detector,” its results can often be inaccurate or inconclusive. A “Cool” or “Bluff” roll of 5 or more could give a false positive “truth” result.

Can be used to store additional items to take out into the field.

Mobile Containment Unit: Stored inside the company vehicle, it can hold up to ten ghosts. Spirits must be transferred to the main containment grid via Ghost Trap. Battery life of 48-96 hours.

Player rolls 1D6 in addition to their “Moves” trait or “Fire Weapon” talent. -1 Ecto-Presence on successful hit. It’s unable to capture ghosts or fire Boson Darts, but its small size allows it to be carried with no encumbrance cost to the player. 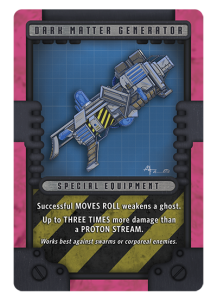 Covers a large area in “positive” green slime. Makes terrain more difficult to traverse. Carrying more than one takes up an equipment slot.

-2 Ecto-Presence on hit. Can hit multiple targets at once. Especially effective against “swarms”. For Corporeal beings or “normal” objects, roll an additional three D6s worth of damage after a successful hit.

Makes it twice as hard for the wearer to become possessed. If slimed, the player’s Cool is only taken down ¼ instead of ½.

Slime-Woven Boots/Gloves: Allows the player to grapple/punch/kick ectoplasmic entities that would otherwise be intangible. Will only lower a ghost’s Ecto-Presence at the GM’s discretion. Also serves as minor protection against Black Slime.

How much gear can a player carry?

The basic rule is that a Ghostbuser can carry three items of equipment without affecting their ability to move around. Typically, a player will want to carry one piece of major busting equipment (like a Proton Pack or Slime Blower) and two pieces of minor equipment (PKE Meter, Ecto-Goggles, Trap, etc). Because of this, the players might want to store an extra three pieces of equipment in the Company Vehicle (but only if a player volunteers to carry the Company Vehicle card in their loadout).

Can they carry more than three? How about a Proton Pack and Slime Blower at the same time?

Well, it’s possible. Just not realistic. Proton Packs and Slime Blowers are supposed to be heavy. Do they simply want to carry it somewhere and drop it off for someone else? If your player is volunteering to be a temporary “pack mule” and not actually use any of the equipment, they can carry as many items as his or her “Muscles.” But if this adds up to four or more items, he or she will be slower and won’t be able to take any actions.

If they’re just trying to find a way to use both the Proton Pack and Slime Blower at the same time, just tell them “No. It’s too heavy.” If they have 5 or more “Muscles,” and are willing to NOT carry anything else, and they insist on it, then let them carry both. But have them take a -2D6 penalty on all “Moves” rolls.

What if my team wants to buy new equipment or expand their operation?

We have a price list for all the expanded weaponry and other ghost busting tools right here: Equipment Order Form. (Also includes information on all the features of the items.)

Neutral Slime
Ectoplasm that is “clear” or has a yellowish/greenish/bluish translucent “tint” is considered neutral and harmless. It will register on a PKE meter, but will not react to physical or emotional stimuli. It is often a sign of recent activity or physical contact with an ectoplasmic entity.

Positive Slime
AKA “Green Slime” consists of positive PKE. This slime has been artificially infused with an energetic, self replicating growth medium that can (in theory) provide an endless supply of positively charged slime. Although its effect is similar to positively charged “mood slime”, it is not considered Psychomagnotheric because its emotional state cannot be altered.

Its effect on a living person will depend on that person’s current emotional state, and the amount of slime applied directly to them. It can range from a calming or “zoned out” effect, all the way up to intense feelings of merriment or euphoria. It’s most effective when used to “depossess” a person from a harmful spirit, or to eliminate Black Slime.

Psychomagnotheric Slime
AKA “Mood Slime” or “Pink Slime” responds to human emotional states, both positive and negative. In small amounts, it will reciprocate the emotions around it. In larger amounts, it will affect the humans in close proximity. The more there is, the stronger its effect, and further reaching its influence will be.

It can be used to open portals, increase a spirit’s PKE, possess or attack humans, and animate objects of all sizes. Direct contact with this slime fills a person with the negative or positive emotions stored within it. Unlike the positive “green slime,” the emotional influence on pink slime seems limitless. This can be a double edged sword however, as the slime will always take on the traits of the strongest emotion in its proximity.

Negative
AKA “Black Slime” often occurs at the intersections between our world and ghost worlds. It’s a dangerous substance formed of ectoplasm supersaturated with negative energy. Black Slime is incredibly caustic and will cause severe damage to anyone who comes into contact with it. Black Slime also appears to function as a conduit for PKE energy and could, if saturated with enough spiritual energy, become a “portal” for strong, malevolent spirits.

Page 49 of the Ghostbusters Operations Manual has a decent “generator” for when you need some inspiration the night before a game. But it doesn’t help you if you’re in a rush, accidentally lost your planned encounter, or are just plain out of ideas. Here are some tables that can help. All you need is a D6.

If you still need more details, here are some “Ghostly Special Abilities”.

Now that you’ve got the ghost, how about making some memorable clients? They’re the ones paying you, after all.

*Protip* You’ll never know when one of your players will want to suddenly question a random NPC bystander that you didn’t plan on. Write a dozen or so name combinations on an index card in advance. Then when the time comes, just pick a name that suits that NPC. Whatever names you don’t use, save for the next session!

Want all this info in a handy-dandy file? No problem! Just check out the Cheat Sheet section below.