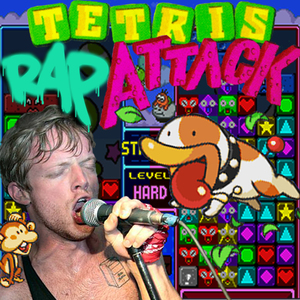 Thanks for all the submissions, gang!  The results of the contest were posted, and the winners played in Episode 2 of Season 3. Just follow the link to check out all the killer beats and the winning rhymes. Stay tuned for the next contest.

Tired of the same old game scores being remixed and retooled again and again?  Nerdy Show is too!

Everyone knows and loves FFVII, Mario Bros., Chrono Trigger, Mega Man, etc. folks have been remixing and re-recording those scores for ages – but what about the lesser known games with great soundtracks?  We’re talking eclectic shit.  We’ve all got games we love whose awesomeness goes unsung.  Now is the time to celebrate those rare games and their seldom-heard scores.  Why?  Because Nerdy Show is launching rare game remix contests with awesome prizes!  That’s why!

This is the first in an ongoing series of month-long rare game music remix contests- all with unique rules and way cool prizes.  You may not have heard any of these contests scores before, but one thing unites them- terrific music.  Check out Nerdy Show Episode 15: “Rare Game Retro-Spection” for our send-up of but a few of the rare game scores we love.

Astronautalis is a rising star in the world of indy rap and a unique talent.  His most recent album was produced by John Congleton and rated by Consequence of Sound among the 100 most important albums of the last decade.  He’s also a total nerd, plays D&D, and one of his favorite video games is an addictive Nintendo puzzle game called Tetris Attack.

Just DOWNLOAD this audio collection and let the fun begin!

Create a hip hop instrumental sampling from the score of Tetris Attack… BECAUSE ASTRONAUTALIS IS GOING TO RAP OVER IT!  You choose the style, you set pace, just make an exceptional track that makes Astro’s heart swell with puzzle tile explosions and he’ll bless it with his expert wordsmithery.  But that’s not all… second and third place winning beats will receive rhymes from two different nerdcore rappers.  Be creative, if you want to re-orchestrate a track – do it, got nuts.  Do what must be done in the name of awesomeness.

All Tetris Attack hip hop instrumentals must sample predominantly from the score to Tetris Attack (called “Panel De Pon” in Japan).  Tracks should be no longer than 4 minutes and of a quality of at least 128kbps.  In your submission e-mail you must list every Tetris Attack track you sampled from, as well as any additional samples.  Nerdy Show will judge your track on its overall quality, concept and execution to decide how it stacks up.  Contact contest@nerdyshow.com with any questions.

1st Place: Astronautalis raps over your track.  You become a legend.

2nd Place: Masurao of Krondor Krew raps over your track.  Your boo still loves you.

3rd Place: MC Coolwhip raps over your track.  You find your pet dog.

Winning tracks (with and without vocals) as well as noteworthy runners-up will be hosted on nerdyshow.com for listening/ downloading and 1st, 2nd, & 3rd place will be played on a forthcoming episode of Nerdy Show.

All contest submissions must be original works composed for this contest.  Submissions found to have been previously existing will be disqualified.

HOW LONG IS THIS CONTEST?

The entire month of December!  All entries must be sent in by 11:59pm EST December 31st 2009.  Judging will commence immediately thereafter and winners will be announced shortly.

Submit your contest entry to contest@nerdyshow.com (again, must be received by 11:59pm EST December 31st 2009)

Be sure to put either “remix contest” or “tetris attack contest” in the subject heading so we know what you’re submitting for.  In the body of the e-mail tell us your name/ handle and every game and track you sampled from.  Be sure that the e-mail address you send from is your primary address as it’s where we’ll contact you.

Nerdy Show claims no ownership of the provided tracks.  We celebrate this amazing and seldom-heard music and hope that this contest will raise awareness of its existence as well as the great work of its composers.  Please contact info@nerdyshow.com with any legal concerns.