Recapping Star Wars Resistance: “The Recruit” Delivers the Fastest Action in the Franchise 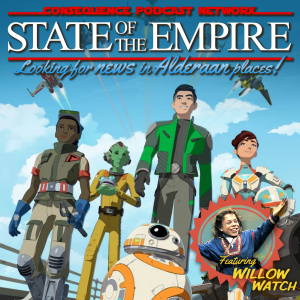 In the Disney era of Star Wars, the movies might have the center stage, but when it comes to expanding the universe, the real action is happening in animation. Star Wars Rebels enhanced and bridged the history of the Original Trilogy and the Prequels in fascinating and validating ways, and even re-shaped and the nature of The Force itself.

Rebels might’ve been a “kids show”, but as the series matured, it carried itself with an all-ages candor that won over the hearts of even the staunchest detractors. Now the Lucasfilm animation department has shifted gears and are taking on a whole new time period – one in desperate need of deeper storytelling: The New Trilogy.

Star Wars Resistance takes place just before the events of The Force Awakens and sees Oscar Isaac as Poe Dameron recruiting a young pilot into a life of spying in Leia’s Army. Main character Kaz Xiono has to navigate an outer rim outpost filled with the raddest racers this side of Mon Gazza Speedway. It’s a character driven, high octane ride that’s a ton of fun right out the gate and here on State of the Empire you can look forward to our episode-by-episode Resistance recaps.

Listen in to our spoiler-free podcast on the two-part debut, “The Recruit” – hear our hot takes on Kazuda and co. and how far we think this series could go in exploring and improving the modern era of Star Wars stories.