State of the Empire :: Episode 60 :: Lucasfilm’s ’83 Animated Feature: Twice Upon a Time 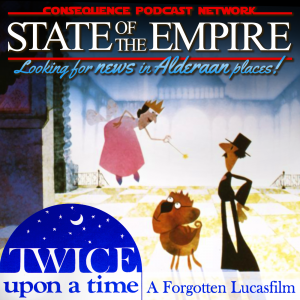 This episode of State of the Empire widens our lens to the rest of Lucasfilm and examines how the innovative production company shaped the world of film as we know it, even through now-forgotten features.

1983, same year The Star Wars Saga ended, a very different kind of Lucasfilm hit select theaters. Twice Upon a Time, directed by John Korty and Charles Swenson, is an animated feature the likes of which you’ve never seen before. Using a unique rear-lit animation style called “lumage” and myriad mixed media techniques, the fractured fairytale stumbles its way through its narrative while sticking the landing on startling and uncanny visuals.

Twice Upon a Time might be off-the-beaten-path, but it casts a long shadow. Join Cap, Doug, and Matt for a journey to “a place so far out, you’ll never, never land” and discover how this Lucas-backed project served as an incubator for talents behind The Nightmare Before Christmas, Pixar, a young David Fincher, the music of Bruce Hornsby, and some Michael McDonald-produced Yacht Rock.

And hey, if you’re looking for our trademark Star Wars speculation, never fear – we’ve got a hot take on who Keri Russell is playing in Episode IX that’ll really Teek-le your fancy.