State of the Empire 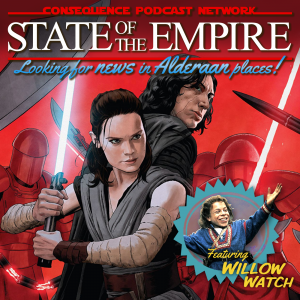 is a Star Wars speculation podcast where we “look for news in Alderaan places”.

Filming for Star Wars: Episode IX has begun and already the leaks are pouring in… but can they be trusted? Sure, there’s some exciting and authentic on-set photos that have found their way onto the internet, but moreso there’s more fan theories and uninformed conjecture posing as “journalism” than ever before. Here on State of the Empire, we celebrate “looking for news in Alderaan places”, but our crackpot theories are always to be taken with a modicum of spice! Join us as we pick through an Ord Mantell-sized pile of garbage, dig up the sordid history of Star Wars fake news, and share what’s really going on with JJ Abrams’ forthcoming feature.

We also discuss the possible focus of Jon Favreau’s forthcoming streaming live action Star Wars TV series, the ties it may have to The Clone Wars, our first takes on seeing the animated series Star Wars Resistance in action, an Original Trilogy era romance that came to Cap in a dream, and a tome of bygone Willow fandom on the deep web.