RPG From Scratch :: First Episode! Our Game Gets a Name 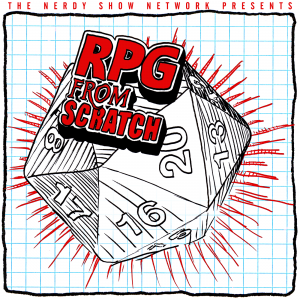 In our first episode, the Homebrew Hombres introduce the D&D-style game that they’re trying to build – as well as share their gripes about the previous systems they’ve played, and how theirs will be different while balancing the twin needs of roleplayers and rollplayers everywhere.

Laughalong as they try to play the game and fix it at the same time. It’s like watching someone sewing their own parachute after getting thrown out of a plane. You and your friends can even play along and curse our names from the comfort of your own home!

Your eyes don’t deceive you, seasoned Nerdy Show listener –  This is a new episode of RPG From Scratch! The series originally debuted in 2016 and met an untimely end. This is an all-new beginning, starting from scratch, if you will. Curious Internet archivists can hear the original episodes by supporting The Nerdy Show Network or RPG From Scratch via their Patreon.

Posted in: Design RPG From Scratch