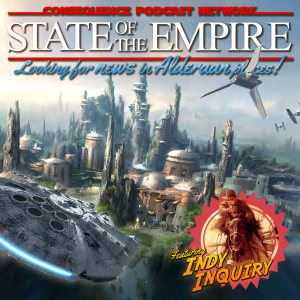 If there’s a bright center to the Star Wars fandom, we’re currently on the planet that it’s farthest from. Fans are as polarized as an Old Republic throwdown and every news outlet is spreading enough confusing, condemning, and confounding headlines that we’re beginning to sound like Saw Gerrera screaming about lies and deceptions. This world of space fantasy escapism is looking far too much like reality.

Fortunately, State of the Empire is here to restore balance to the Force.

We discuss the cloud surrounding Solo: A Star Wars Story and search for the truth in the articles and unnamed sources that purportedly know how the film’s financial performance has (or hasn’t) affected the future of Star Wars spin-offs. Then we venture off to Black Spire Outpost aka Batuu aka Star Wars: Galaxy’s Edge aka “Star Wars Land” with a map and a decoded poem to help us discern what and who we’ll be encountering in the interactive theme park. We also explore new ways the comics are expanding the universe and informing other corners of the transmedia empire, learn about Jim Rash’s character in Star Wars Resistance, consider the future of Captain EO, and learn about some big shakeups for the forthcoming fifth Indiana Jones feature.