Willow Watch :: The Road to Willow 2 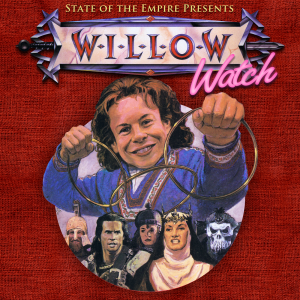 Welcome to Willow Watch! A podcast dedicated to the 1988 Lucasfilm fantasy epic Willow – In which breaking news comes in all sizes, and obsessive fandom is the greatest magic of all.

Willow Watch has been a reoccurring feature since our Star Wars podcast, State of the the Empire, began in 2012 – when Disney bought Lucasfilm and we first asked: does… that mean there could be more Willow? Over the years we’ve learned that the answer is an emphatic “YES!” Not only do we want it, not only do the cult film’s myriad fans want it, but the stars and the director want it too. Now, just in time for Willow‘s 30th anniversary, director Ron Howard has returned to Lucasfilm with Solo: A Star Wars Story, he’s working again with Warwick Davis, AND he’s admitted that there could be more Willow on the way. THE BONES HAVE SPOKEN!

In celebration of Willow‘s 30th anniversary and this momentous news, throughout 2018 we’re doing a series of Willow Watch specials. First up, we’re recounting the past 6 years of Willow rumors and discoveries, archiving the best of our Willow Watch segments embedded in State of the Empire. In this episode we’ve chronicled the long road to the hypothetical “Willow 2” – from the tongue-in-cheek speculation to the barrage of legitimate rumors and hearsay that have culminated in this uncanny moment where dreams and fate have intertwined!